Back to Basics Using a Reef Hook 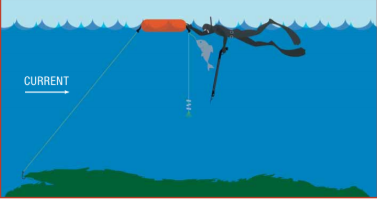 ] Learning to use a reef hook was probably the single greatest skill that I acquired that made my shore diving more effective. When I was growing up we never used reelguns, and when we wanted to mark a spot for crayfish we would just jam our gun into a crack in the reef. The number of times I watched a big fish swim past is too many to recollect.

A few years later reelguns became more popular. We all started using them and with it came learning to use a reef hook. At first it was used just to mark a crayfish hole, but as time has gone by, the reef hook has become an integral part of the shore diver’s arsenal and much more than a tool for marking a cray hole. Here are few ways you can use a reef hook and make your shore diving spearfishing more effective.

When reefed up (the term used for when your buoy-line is hooked to the reef) your float becomes a good marker buoy. And you can dive way more effectively because you will be able to work out where you are more easily once you have a point of reference.  Find a part of the reef that is either a good holding spot for fish, or a part that is a prominent piece of structure within close proximity to other spots that hold fish or crayfish. Hook your reef hook into some redbait or tough weed. Now you have a base to work from, and will be able to work an area around your float untethered and always with a gun in your hand.

If you find a great spot surface and immediately turn and find your float, take notice of the distance and angle you are from the float. This will enable you to dive back down on the same spot even if the current is pushing you off or the vis is too dirty to make out the spot from the surface.

TIP: Use your float and take a distant landmark to help with the angle if you can. This will help with your accuracy. Also see the article in Vol 10 on landmarks.

Another big advantage of ‘reefing up’ is that you don’t have to swim your crayfish around. Clip a net onto your float and use just a small waist pouch to transport the crayfish from the bottom to the net attached to your float.

This also means that you don’t have to drag around a float loaded with fish, although be sure not to stray too far from your float if there are sharks in the area. A trick is to hang your extra gun from your float so that the spear end is below the last fish. In most cases a shark will approach from below and the spear will ward it off. I did not believe this until I saw it work for myself. However, this is by no means a foolproof system and being vigilant is always best.

One of the greatest benefits of using a reef hook is seen when the current is strong. When ‘reefed up’ your float will provide a great place to swim back to and rest. Most guys will just land up getting tired and eventually drift off the reef, or at very least drift off the current side of the reef where you normally find the highest concentration of fish. If possible, try hook up ahead of where you want to be diving. This will mean that you will often need to swim up the current to the front of the reef. This will require some energy, but once hooked up you can relax holding onto your float and make your dives behind the float without having to expend valuable energy before a dive. It’s a whole lot easier to swim back up to the float after a dive, than swimming up the current to where you want to be before trying to hold your breath.

TIP: A bungee cord a metre or 2 long just after the reef hook will reduce the sudden jolts from waves in rough conditions and the extra pressure when hanging on. This will help your reef hook not tear out.  You will be amazed at how much energy this saves and how much more effective your dives will be in using this technique.

This same technique is also very effective when targeting gamefish like Couta. Fish like Couta often swim on a specific line, this refers to a certain depth on a reef that they follow. They also frequent a certain ledge or edge of reef, and this means that once you have identified these areas you want to try stay on these spots for as long as possible.

Reefing up on these areas will enable you to hang your flasher off your float right over the spot you want to be on. This is especially effective if the vis is not so good or it’s deep and you are unable to make out the reef below. This way you are always on the right spot and don’t waste time swimming around aimlessly or burning energy keeping up with the current.

What often happens, is that gamefish swim up the current, especially if it’s early in the day and they are feeding. This will mean that your flasher will funnel the fish right underneath you as you hold onto your float, so be sure to watch out for these fish.

TIP: If while swimming out to your spot you see gamefish, dive down and reef up, even if it is not where you expect to see fish. Do a couple dives in that spot. You never know, maybe that’s the line that the fish are swimming on. And while everyone else is sitting on the usual spots you are cleaning up because you found the ‘magic’ line for the day.

By far the greatest benefit of ‘reefing up’ is being able to dive untethered with a reelgun. No dragging heavy floats and lines around. This said, you need to have your reelgun skills sharpened to deal with large gamefish, especially with no boat to call for help.

Recently I have become conscious of the damage a reef hook can do to a reef, especially in areas where there is no tough weed and or redbait. Redbait is tough and hooking into it does not seem to harm it. But hooking into soft corals and sponges is very damaging.

The alternative is using a small anchor which hooks up on rocks and structure and does not damage the reef at all.

A friend of mine, Tom, has found a way to effectively use an anchor that is arguably easier and more functional than a reef hook. The anchor which is the best is a standard folding 0.7kg anchor with the locking ring removed. It is heavy enough to sink fast and catch on the smallest cracks in the rock.

TIP: Your buoy line will need to be slightly longer than when you use a standard reef hook as it helps to have some angle on the line for the anchor to get a good grip. Again, using a bungee cord will also help take pressure off the anchor and help it to stay ‘hooked up’. A standard shark clip is attached to the anchor which makes it easy to attach to your buoy line. And on the bottom a large carabiner clip to attach the anchor when not in use to your weight belt. The anchor folds away and is hardly noticeable.

When you are done and want to move on it is normally as simple as swimming slightly up current ahead of the anchor and giving it a little jerk. It is not often that you need to make an unnecessary dive to unhook it.

TIP: When you are about pull up anchor to move spots, keep the float with you, pull up the anchor and then let the line out in one big loop behind you. When it’s time to drop the anchor, it goes straight down to where you want it to go with no drag – it stops that issue of watching your anchor sinking ‘backwards’ towards your float behind you. It really allows you to drop the anchor very accurately. When swimming from spot to spot you can either just hold the anchor, or clip it onto your weight belt leaving your hands free. I personally like the fact that if I have to suddenly chase a fish I can drop the anchor and not have a heavily laden float holding me back. It also serves as a very good marker and you can go back to the exact spot you first saw the fish. The extra 700 grams also adds a little extra weight which is great when in the shallows or while swimming out to a spot and having to do a quick dive to get a passing fish. Once in the deep you drop the anchor, mark the spot and shed the extra weight.

The downside is that the extra weight becomes seriously heavy after a few hours when diving in deeper water. If there is no wind or you are drifting with the current then I just clip the carabiner to the float, and just drift with the float. Then just unclip and drop when you need to ‘reef up’.

Being able to hook your buoy-line to your belt also means that you can have both hands free when swimming in and out of the surf or operating in the shallows.

I personally still prefer to clip my buoy line to my gun when swimming through bigger surf, and just leaving the anchor on my belt. I guess I am always worried I will get drilled and lose my gun if I get thumped by a big wave.

But either way, whether you use a reef hook or an anchor, ‘reefing up’ will make your shore diving more efficient and therefore more effective.