Behind the Lens Part Four 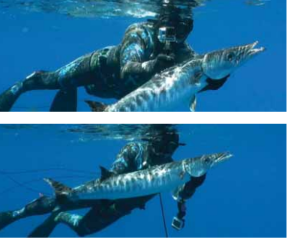 In this article, I am going to share with you the secrets behind how the In The Zone team gets great self-filmed spearfishing shots. Before I do that, let me quickly re-cap what we have talked about in my last three Behind the Lens articles.

Behind the Lens Part 1 (USM Volume 15): If you want to take your spearfishing footage from good to great, you are going to have to be passionate about it, intentional in how you do it and willing to make sacrifices for along the way.

Behind the Lens Part 2 – The gun mount technique (USM Volume 16): This is the most popular technique that requires the least amount of effort to get the shot on camera. It’s a really good hands-free way to film your spearfishing but very limiting, unrealistic to the viewer and almost impossible to get great footage.

Behind the Lens Part 3 – Camera settings and the head or mask mount techniques (USM Volume 17): This is probably the best hands-free technique you can use to film your spearfishing. This technique also comes with many draw backs but at least the footage is quite stable when it counts the most – right before you take the shot through to when you swim for the surface.

This next article is going to be all about:

Ok, so today you are going to receive years of knowledge, purchased with blood, sweat, tears and loads of trial and error from the ITZ team… and all in just a few paragraphs.

Right from the get-go in 2008, we realised that to get really good spearfishing footage, you have to have a good breath-hold or spearo cameraman to film you. You really can’t beat the quality that a dedicated and focused cameraman with these skills can produce, as opposed to self-filming your hunt. The problem is that these guys are quite hard to find and often cost a lot of money to hire. If you take a guy like this on a cool trip with you and don’t pay him, the urge to spearfish will often hi-jack the filming side of the mission (been there, done that and got the botched film job). So, the next best option is to self-film your spearfishing using a hand-held set up… and if you want great footage doing it this way, you have to work hard at it and be willing to sacrifice big time along the way.

There are a few different hand-held setups that I have been exposed to over the years but before we talk about each option, let’s first clarify why I am a huge advocate for this kind of self-filming technique as opposed to the gun mount and head mount techniques.

Okay, so now that you know how highly I value this self-filming technique, I would like to have a look at all the different types of hand-held set ups.

To finish off this article, I have some personal advice for the guys out there that really want to take their spearfishing cinematography from good to great but don’t have anyone to help them.

I believe that to capture all aspects of your hunt by yourself and without anyone filming you, you need to consider a combination of two techniques I have mentioned: The hand-held technique to film your dive, the shot and the fish screaming off, and then the mask mount (not head mount, it’s too cumbersome for the combo technique) with a Gopro to film the fight, the landing of the fish and calling the boat for help. Then, before you put your fish on the boat, you can give your hand-held camera to the guy on the boat to film you holding up your fish in the water, putting the fish onto the boat and holding your fish up on the boat.

I would suggest the latest Gopro on your mask mount and the latest Sony Action camera as a hand held camera. The Sony has a great-long life battery, a very comfortable and helpful hand mount adaptor and amazing in-housing sound capabilities. It also has an image stabiliser, so in my opinion it’s an all round winner.

With proper camera and SD card preparation the night before and a passion to get it right you will eventually find your rhythm using this combo technique and seriously up the level of quality in your spearfishing filming and videos.

I initially started filming with the custom Gopro handle and then moved over to the Speargun imitation handle (a lot more relative and comfortable) in 2010 because it would offer me points 1 to 5 already mentioned above as major benefits as apposed to filming with a gun mount or head mount (never an option in my world). After using these types of mounts for a couple of months I found myself really battling to get the framing right. With type 1 and 2 there is very little point of reference to help guide the angle you choose in framing your footage. The slightest angle change to left or right, in the heat of the moment, could translate in putting your framing off quite substantially. So, although this unit is very light and way less cumbersome than others I have seen, I have found the results very inconsistent.

I recently went on a film trip to Madagascar with Greg Pickering and Chris Wood. Chris is quite the handy man and showed me a super cool version of this same kind of Gopro hand held mount (type 2) that he had made. Very cool! As you can see it has a white perspex platform with 2 horizontal edges, giving you really good directional awareness of your framing. I have found this type of hand held mount very effective and one that I would continue to use on fun days diving at my local spots.

For days when I go somewhere special and want to take the filming side of the dive a little more seriously, the Gopro becomes a backup and I take out my Canon XA10 with custom made pistol grip housing and LCD screen. This is the ULTIMATE setup for self-filming your diving. If you want high quality self-filmed spearfishing footage this is the only way to go. I find that sometimes the small hand-held mounts cause the filming side of the dive to be more of an afterthought, whereas holding a bigger camera in my hand slows my body movements right down and causes me to be a lot more aware of filming the hunt. The biggest benefit though, is the quality of the footage. The Gopro, as I have said before, is incredible for its size but no matter how you look at it they have small lenses and small sensors, and the bit rate you are shooting at is low. In simpler terms, the Gopro’s low light filming ability is not very good. The deeper you go, the more light you lose, and low light filming is exactly what you are doing while spearfishing. The bigger cemos chip HD cameras like the Canon XA10 have much bigger, higher quality lenses, a higher bit rate and much bigger sensors, lifting the quality of your footage exponentially. I also have an LCD screen on my set up so I can see and frame all the other filming quite well.

I have recently been given the new, and not yet released, wrist mount developed by the Rob Allen R & D guys. This product is still in the research and development stage and in my opinion could be the answer for spearos who want a hands-free filming mount but want better results than the head mount and gun mount provide. The mount acts like a hand-held mount but gives you the benefit of a hands-free filming experience as you have full use of both hands while fighting and landing your fish. The mount is also adjustable so you can film your mate by adjusting the camera to point away from yourself. As I said, the product is in research and development and still needs a lot of testing before it’s ready for the market.