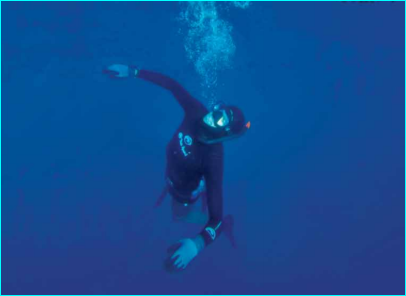 The catch phrase on most divers’ lips during recent weeks seems to have been “diver safety”. Questions arise, such as “How can I become a safer diver?” or “What are these inherent dangers we keep hearing about regarding breath hold diving?” The most common concern among novice divers is “What is SWB and is there anyway to prevent it from happening to me?”

The truth of the matter is that no one is exempt from falling victim to a blackout, be it shallow water blackout, deep water blackout or surface blackout, which is seldom mentioned but does occur when divers overstay their welcome underwater and upon surfacing begin gasping for air.

Shallow water blackout (SWB) is insidious and in most cases occurs in individuals pushing or testing their limits, or not adhering to their breathing reflex. Many excellent in-depth articles have been written on the subject. The intention of this article is to inform divers how to prevent falling prey to this silent death. However, a basic

understanding of freediving physiology is required if you want to avoid a blackout:

Hypoxia is a pathological condition in which the body is deprived of adequate oxygen supply. In extreme hypoxia cases where there is complete deprivation of oxygen supply, this condition is referred to as anoxia.

Defined as more than 25 breaths per minute, this form of excessive rapid breathing reduces C02 levels in the body drastically.

This refers to reduced C02 levels in the blood with elevated pH blood levels (alkalosis) caused by hyperventilation. This condition results in vasoconstriction and cerebral vasoconstriction, leading to dizziness, anxiety, pins and needles etc, and can cause cerebral hypoxia and result in a blackout. When in a state of hypocapnia, a diver may lose consciousness on the water surface while breathing up. For this reason avoid pre-dive hyperventilation and repeated hyperventilation at all cost.

When a body enters an elevated state of hypoxia, uncontrollable physical movements are displayed. These involuntary movements are often referred to as a samba by freedivers when the critical threshold of breath holding is overstepped.

When a diver surfaces fully conscious and is gasping for air, this leads to a sudden drop in partial pressures after the first inhalation. A diver in this predicament can easily succumb to a surface blackout within the first 20 seconds of surfacing. In this case, hook breathing should be performed to limit the chances of a blackout.

Unconsciousness may strike as you are surfacing from a deep dive. The expanding, oxygen-hungry lungs scavenge oxygen from the diver’s blood stream and an over-supply of CO2 diffuses back into the lungs. This partial pressure change is most prominent in the last 5 to 10m below the water surface. The brain stem detects extremely high levels of carbon dioxide in the bloodstream, and this message is transmitted to the brain, which shuts down temporarily to conserve the little oxygen it has to keep itself alive.

This usually occurs when you reach your limit and refuse to adhere to the breathing reflex while you are at depth. C02 levels in the circulatory system reach the critical threshold and you lose consciousness. This could happen while still at the bottom or while you commence your ascend. Another instance which leads to DWB, is excessive and repeated hyperventilation, suppressing the breathing reflex as thus creating alkalosis blood. In this case, loss of consciousness is due to hypocapnia.

Falling victim to a blackout can happen to anyone, however if you adhere to a few simple rules, you should reduce the chances of it ever happening to you:

Allow adequate ventilation time on the surface to recuperate after each dive. Take your time when breathing up and perform deep (diaphragm) ventilations to blow off excess C02. Always perform diaphragmatic and thoracic ventilations.

THE 3 PHASES OF A COMPLETE BREATHING CYCLE:

Breathing occurs as the diaphragm is flexed downward and the abdomen and lower rib cage is pushed outwards. On exhaling this is reversed, allowing the diaphragm to relax, retracting upwards into its natural position.

Breathing occurs as the chest and upper rib cage rise. The abdomen does not rise in this instance. Breathing is shallower than abdominal breathing.

Additional breath is forced into the upper part of the lungs and airways. Move the shoulder slightly back and down when the abdomen and thorax are both fully expanded. This action will allow you to force more air into the lungs and upper airways.

These extra breaths are referred as ‘packing’ which allows a diver to take on a few more ml. of air to equalise the ears and mask without having to use too much of the full lung reserves.

HOW TO PERFORM A COMPLETE

Start by breathing in slowly and focus on the lower part of the lungs by flexing the abdomen and the lower part of your rib cage outward. When the abdomen and lower rib cage is fully extended outwards, carry on with the inhalation and commence to raise the chest and upper rib cage until the lungs have reached total lung capacity (TLC). At this stage, move your shoulders slightly back and downwards, take the last final gulp or two of air and fill up the upper part of the airways.

Pause for a brief moment when lungs are completely filled and begin the processes of exhalation through the mouth. To exhale, reverse the process by starting to exhale the air in the upper airways then the chest and finally the abdomen (vital capacity VC), forcefully flexing the diaphragm upwards into the chest cavity in an attempt to expel as much air in the lungs as possible until there is no more air being expelled (residual volume RV). Take 2 or 3 big breaths just before you hold your breath (97% to 99% O2 saturation). Perform hook breathing upon surfacing from each dive to avoid surface blackout.

Important: Always adhere to your breathing reflex (diaphragm contractions) and not your diving watch to decide when to surface from a dive.

These are just a handful of tips, which will make a big difference in blackout prevention management. There are other factors that contribute to losing consciousness underwater, and these will be followed up in detail in future issues of USM.