Lung Squeeze : Coughing your lungs out! 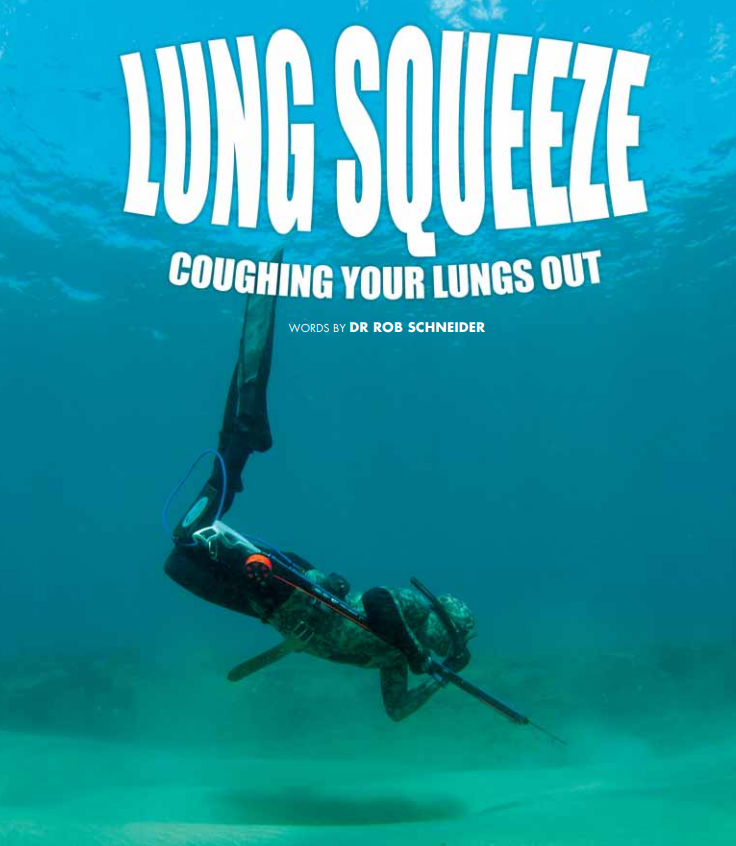 Lung Squeeze is a condition that is practically unique to the pursuit of Breath-Hold Diving. Scuba divers
will not recognize the term and most medical doctors have never heard of it let alone how to treat
it. Various folk lore and rhetoric has sprouted up about this poorly defined and largely ill-understood
phenomenon. Sadly, the medical fraternity knows little of the condition and research in the area is
rather scant. Let us then dive a little deeper into the lake of lung squeeze to illicit some knowledge and
hopefully avoid getting a brain squeeze in the process.

Definition:
Lung squeeze is also known as chest squeeze or more astutely as Pulmonary Barotrauma of descent
in Diving Medicine circles. The description refers to what happens in the lungs because of increased
pressure during descent and some would include the trachea as part of the lung system in this
regard, giving rise to tracheal squeeze as an additional consideration.

First, Boyle’s law: “The volume of a given mass of gas is inversely proportional to its pressure,
if the temperature remains constant.” By this gas law, it is understood that the volume of gas
in a closed system or space will decrease as the ambient pressure increases and vice versa.
In Breath-Hold diving our Lungs represent the closed gas containing space, with the
increased ambient pressure provided by the water’s hydrostatic pressure during descent.

For every 10 MSW (metres of Seawater) an additional 1 atmosphere (ATA) of pressure is
incurred. Take note that this volume decrease for pressure increase follows an exponential
curve rather than a linear one, as shown in Figure 1 below.

With measurements of the lung volumes and the application of some mathematics, it was
previously thought that the maximum depth that any Breath-Hold Diver would safely attain could
be calculated. Boyle’s law when applied to the Lung volume predicted that when a diver’s
TLC equalled his RV, as normally defined, the Lung’s would start to collapse and the limit
thus reached. Typically, this would be in the 35 to 45 MSW range. Clearly, this is not the case
as free diving depth records now exceed 200 MSW. This led to the discovery and description
of other physiological mechanisms that play a role. Besides hydrostatic compression of the
chest and lungs, the most important of these is the central pooling of blood in the chest via
redistribution from peripheral tissues. This blood, up to 1,5 litres, is then taken up into the
heart and blood vessels of the chest. Whether this distension of the vascular bed causes
mechanical damage in the lungs is not really known.

Essentially the central pooling of blood in the chest equalises the pressure gradient when
the RV is reached and thereby decreases the effective RV thus allowing for deeper depths
to be attained safely. This mechanism though, increases the pressure in the pulmonary
vascular bed and subsequently in the pulmonary capillaries with rupture and haemorrhage being
a possible consequence. Thus, begging the question whether this would set the absolute
limits for Breath-Hold Diving?

Symptoms and signs:
From the above discussion, it would appear that Lung squeeze would only occur in very deep dives, but there are
several reports of Lung squeeze occurring in shallower dives, especially repetitive ones with short surface intervals, even
from as little as 4 metres. The development of pulmonary oedema during head-out immersion and surface swimming
is well documented and is probably related. Individual anatomical, physiological, pathological and day-to-day
variations all play a role in the development of Lung squeeze. There are several symptoms and signs of Lung squeeze with
all or only some being present during the onset and duration of the condition.

Symptoms: Chest pain; Shortness of Breath; Sensation of fluid in lungs; Coughing; Fatigue; Sensation of squeezing
or constriction of chest during descent; Dizziness; Nausea; Weakness; Paraesthesia; Faintness.
Signs: Hyperventilation; Coughing up bright blood; Coughing up foamy blood, Vomiting; Respiratory distress;
Disorientation; Loss of Consciousness, Neurological fallout; Cardio-respiratory arrest; Death.
The condition can range from being mildly irritating to severely debilitating and can even result in death. In terms
of duration, it can be very short or last up to a few months. Re-occurrences are common and the question of permanent
damage arises.

Avoidance and Mitigation:
It is worth considering some of the following tips to try to minimize or avoid the occurrence of Lung squeeze:
• Maintain your fitness, especially your respiratory fitness.
• Build up your CO2
tolerance to reduce contractions
at depth.
• Warm up to reduce contractions at depth.
• Avoid stretching out at depth with arms or neck. No
excessive or violent movements are required or desired.
• Improve and train your ribcage flexibility.
• Dive to depths you are comfortable with and avoid panic.
• Turn before you experience contractions at depth.
• Build up slowly when starting to dive to depth.
• Avoid deep dives after travelling, especially if you
have changed time zones or experience jet lag. Recover
completely first.
• Learn techniques to relax while diving, especially at depth,
and concentrate on releasing tension from around the
chest area specifically.
• Learn the Frenzel/mouthfill technique of equalisation as it
is gentler and uses less air.
• If you have a history of Lung squeeze, rest the day after a
deep dive as there appears