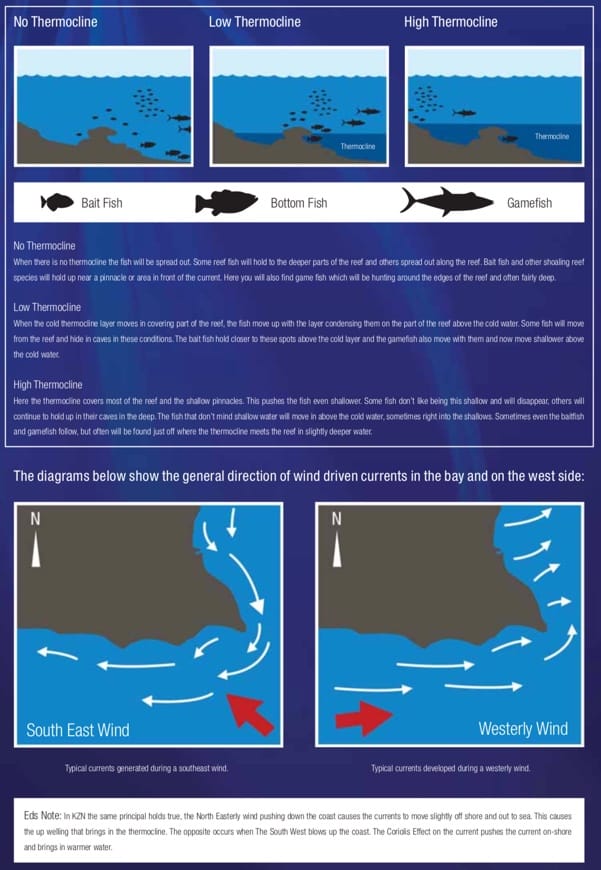 How do you feel about jumping into 10 degree water with no suit on? Not a F$%K! Well fish feel the same. They keep out of the cold water, if they can.

One of my first actions on a diving day is to predict where the thermocline lies, then do a few dives to find at what depth it actually is and only then do I make a call as to where I plan to go. Why do I do this? Well, I have dived for many years and many a time come home with no fish, and other days with plenty.

When I looked for a common denominator, it turned out that a thermocline sweeping up over the reef was a fish concentrator and made spearing very efficient. The other great thing is that on days when the cold water was sweeping up over the reef, I could pick what I wanted – like shopping. The fish were generally easier to spear too. This is why I firmly believe in looking for the thermocline.

Most of my exceptional hunts have involved a thermocline. Perhaps one of my best, was predicting a thermocline to bring in White Steenbras on a certain reef. My model was good – the shocking cold thermocline was at a perfect height on my spot. I did six dives, the first five of which produced a White Steenbras of between 11 and 17 kg on each. On the sixth dive I left the Steenbras that was in range as I would have exceeded the bag limit that was in place at the time. My stats tell me I would have had one or no fish without the thermocline.

To give you some insights on thermocline prediction, here is a condensed excerpt from an e-book I wrote about dive sites in Port Elizabeth back in 2005. (available on www.freedive.co.za).

Wind and season are prime factors controlling diving conditions. Most divers like flat, clear, warm water without much current. Obtaining such conditions in South Africa is something of a distant hope. Through much experience (+1800 dives) of the un-ideal conditions of big swell, ice-cold water and dense plankton that reduces the visibility to less than a metre, not to mention howling gales, I have developed a model that describes how to find the best dive conditions for good visibility and seeing lots of fish.

I certainly do not take full credit for this model as it is the result of many years of combined experience of both divers and fishermen. If you apply this model to your dives, I believe that you will increase your chance of having a pleasant and exciting dive.

If you are far from Port Elizabeth and seldom or never visit the city, then consider how you may apply or investigate the effect of winds and season on the dive conditions in your area – it will have common threads that just need a little tweaking for your area.

As we all know, winds have a tremendous influence on diving conditions. Strong winds drive large swells that churn up the bottom and reduce visibility, as well as make for heavy surges on the bottom with the passage of each swell. The winds also drive currents which in turn influence water temperature and visibility. The weather cycles are closely linked to water movement cycles.

Ever asked yourself: “How can I use the wind to get more, or better fish?” Well, you can – just like the weatherman can predict the weather (sometimes), you can also predict the water conditions pretty well. If you know the conditions and know what fish like and don’t like, you already have an advantage.

Here is the main underlying fact: In the Southern hemisphere, water moves in a direction to the left of the wind e.g. a west wind creates a current to its left i.e. from southwest to northeast (the reverse applies in the Northern hemisphere).

In the Eastern and Southern Cape:

This chilly upwelling in the bay is most noticeable when east winds have blown for a few days before the wind swings to the west. After blowing for some time (24 hours plus) the west wind will warm the whole bay as warm surface water moves around the point of the bay (e.g. Cape Receife) into the bay and displaces the cold upwelling.

OK, so how can you use this information? Rising thermoclines shunt hoards of fish from deep water to shallow reefs. So, if you can be on the reef as the cold water moves in, up and over the reef, you be there to meet those fish… This water shift is cyclic – what the west wind does the east wind reverses.

Easterly winds (NE, E and SE) are the reverse of the west winds – they cause an offshore current. These winds cause a cooling of the water from the points of the bays westward – i.e. Cape Receife toward Seaview in the PE area.

This cooling is the result of offshore currents that gradually peel off layer after layer of the warm surface water and in the process lift cooler water from the deeper areas. The east winds tend to calm the ocean west of the points which is good for spearos and more importantly they bring up the cold “front” from the deep – it’s the thermocline that creeps upward toward the shallows from the deep. The temp can go from 21oC to 12oC over a depth less than a metre – I have sat in the biting cold below and raised my hand up into the warm above. Now if you can time it right and dive when thermocline sweeps up over your hotspots you may need to get your dive buddies to swim in so you can safely bring in that boatload of fish.

East wind summary: Offshore winds = offshore current outside bays and cooling up of water outside bays. Inside bays east wind = onshore, chops-up and warms bay water. After many days east wind bays gradually chill from below as well.

The southwest and east winds are prevalent in the summer months while in the winter, westerly, northerly and north easterlies prevail. This is a general pattern but can be rather erratic from one year to the next depending on the El Nino effects. Northerly winds tend to cause upwellings that are more gradual than the east or south east winds. A south wind generally keeps the bay warm but gradually cools the ocean to the west of Cape Receife (referred to as “the west side”).

I have given quite a lot of somewhat technical information so it may be worthwhile to consider a typical cycle. For a detailed account of a full weather/water cycle and how you can get the best out of it as a spearo visit www.ultimatespearfishing.com and read the extended version of this article online.