Another trip to the Alphard banks 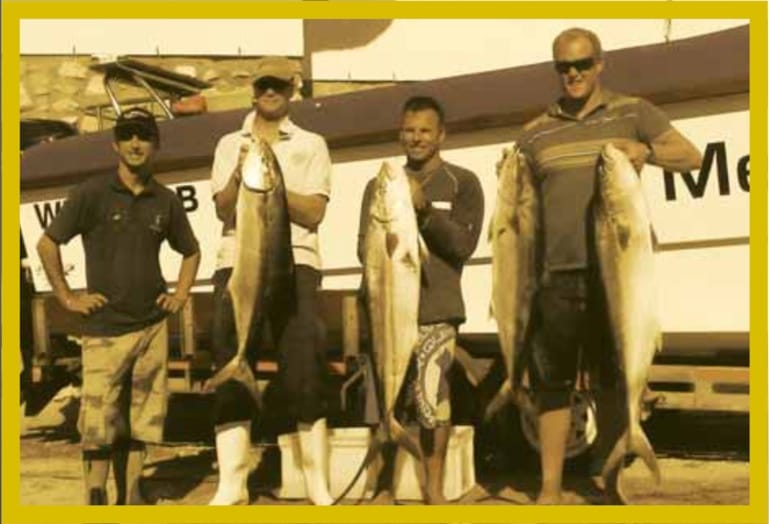 40 miles off Struisbaai lie the Alphard Banks – a renowned spot for spearing Tellowtail. With reports of great fish being shot the previous week, we were amped for a trip. A few emails later and 4 divers – Ants, Tony, Brendon and Justin – were committed. After a phone call to Steve and Ryan to charter their boat ‘Met Eish’ and we were on. The plan was to launch at 6am. Some chose to stay the night in Struisbaai, while the braver ones partied in Cape Town and made their way down at the crack of dawn, hoping to catch a few winks on the way out to the reef.

The sun rose with a moderate westerly blowing. Windguru had said no wind – we should have sensed at that point that perhaps the guru was having an off day. ‘Met Eish’ is a 28 foot buttcatt and is well laid out for spearfishing with loads of space. With the skipper and mate Ryan, also spearfishermen, the slightly breezy conditions were soon forgotten as we got beyond the 5-mile to find blue water. The talk soon turned to fish that had been seen, shot and lost on previous trips.

The journey out took about two hours on the slightly choppy waters. As we neared the bank, we were greeted by birds falling and Yellowtail splashing on the surface. Two of the divers, Brendon and Tony, very kindly (for reasons only known to themselves) grabbed for the spinning sticks and were immediately being stretched on their first cast, while in the front of the boat Justin and I were fighting over the soap bottle trying to get into our suits in record time. I think we were in our suits with all our kit on before the first Yellowtail was in the boat. After asking Steve if we could jump, we were in the water before he had finished saying yes.

The viz was mind-blowing, 15 to 20m, and there were fish everywhere – from just below the surface to 20m away. Okay, not the huge ones we had seen in Louis’ photos from the previous week, but Yellowtail of around 3 to 5kg everywhere. If you are a “bamboes hoender” from the Cape and are used to shooting fish in pea green water then the sight of hundreds of Yellowtail in purple blue water was more than enough to get the juices flowing. If we had been anywhere else every fish we saw would have made a deserving target, but we were there for the big ones: fish above 10kg with the hope of a 20kg specimen.

The wind was creating quite a chop with water breaking over our heads and fish everywhere in the strong current. The adrenaline was pumping, and relaxing and breathing up was difficult. The reef comes up to 16m in places, and is covered in short seaweed and occupied by shoals of big rays and small sharks. The idea is to drop a marker buoy on the Pinnacle, to be dropped up current and to time your dive to land on the Pinnacle and wait for the big fish to move up current onto the drop off. In a single drift, you normally only get one or two downs before the current has pushed you over the pinnacle and beyond the fish, thus the sight of any shootable fish gets you going down, no matter whether you are properly breathed up. And there is the conundrum. Do you shoot the normal size Yellowtail looking at you… or do you get back on the boat empty handed and give the next guy his turn, hoping that the big lurker comes in the next drift?

I personally just like shooting fish – big or small. In fact the small ones even taste nicer, and that’s what I did. On such an occasion, the 5kg fish took off for the bottom as I shot it, and as I pulled it up on the float line I looked down to see that it had brought its big brothers from the depths. It was surrounded by a shoal of 10 to 20kg specimens, not one but a hundred of them. I was trying to get the fish off my spear in a hurry. They always seem to come off when you don’t want them to but when you need them off quickly, they stick like glue. I ripped it off in pieces – flesh and guts everywhere.

This only seemed to excite the shoal of Yellowtail and brought them in closer. There were big fish everywhere. I somehow managed to get the spear back, reloaded the gun, took a quick breath and got down to put a shot into the fish closest to me. The fish took off at speed and I was soon hanging onto my buoy line being towed up current with a smile on my face.

Brendon and Justin arrived and were both into decent fish while they watched me being towed around. Once landing their fish, Tony eagerly jumped in and I took a break, and eventually the Yellowtail was in the boat.

We dived until about 12 o’clock, when we decided to call it quits as conditions were getting worse. Waves breaking over the bow and gunwales of the boat. Even though conditions were tough we managed to get a good bag of big Tail! The other fish spotted were decent sized Sangora (Justin bagged a good specimen) a lot of bait fish. We’d all speared new Personal Bests that day, so were feeling fantastic despite a bumpy 4 hour trip back to Struisbaai Harbour (the trip out had taken only 2 hours, but the sea was now very choppy).

All in all, a great day’s spearing and well worth the long trip home. Many thanks to Steve and Ryan and their boat “Met Eish”