I Dreamed of Inhaca 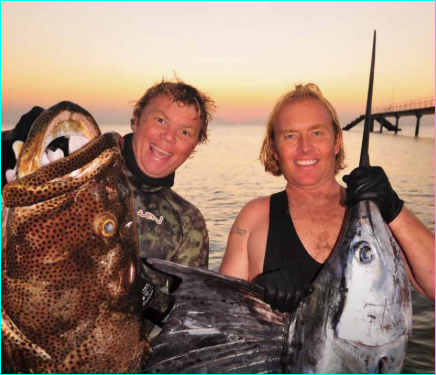 ]\ If you are anything like me, you dream of the perfect dive trip. Constantly hovering at the edges of your imagination, it’s the ideal adrenalin packed ocean hunting experience that would satisfy every craving we spearo’s have for the ultimate adventure. This is a story of how my dreams came true. For me, a great spearfishing trip is not just about island paradise, blue water and world class fish. It’s about all of this, plus being able to capture the magic on camera as well. After many months of planning, strategising and fundraising we managed to pull together a 6 man crew to join Chris Coates and myself on the Mozambiquan adventure of a life time.

One of these crew members was the one and only Rob Allen. Rob said he would bring his boat and gear, and skipper us onto some incredible Mozambiquan reefs.

Ok, so let me just pause there for a moment. Rob Allen, his boat, his gear and the legend himself as our skipper and guide. This was most definitely beyond my wildest dreams.

It all started on Friday 11 May 2012. I flew into KZN, Chris picked me up from the airport, then we headed off to the Dive Factory to meet up with Rob, sort out all the gear and pack. Rob and the team were there to greet me and proceeded to kit me out with a brand new RA wetsuit, gun and all the gear needed to dive in Mozambique’s blue water conditions. I was completely overwhelmed and blown away. I think at this point I realised what was happening… my dream was becoming a reality and I was smack bang in the middle of it.

We headed off to Mozambique the next morning and before I knew it we were at Club Naval in Maputo getting ready to make the 35km crossing to Inhaca Island. We arrived at Manico Camp, a beautiful ocean side lodge situated on the western side of the island. With a couple of daylight hours to spare, we immediately started getting everything ready for the next day’s diving.

I hardly slept. We had done so much to get here, and it was almost time to dive into paradise and begin the hunt. Suddenly it was morning: ‘go’ time! We loaded up the boat and headed on out into the blue. As we got deeper and deeper out to sea, the water turned bluer and bluer. I live and dive in PE. If we get more than 8m vis we are stoked and at this point I was looking at 15m plus. Apparently this is pretty average for Moz, but definitely not average for me.

Finally the moment had come. We got onto the reef,threw the flasher in, strapped on our gear and jumped in. The reef looked amazing. We started out at 25m (super challenging for me). I ended up not shooting anything on the first spot, though Chris got a nice size Jobfish.  We then moved onto a mind-blowing reef called Baixo Danae. As we arrived, there were fish everywhere. Bohar Snapper, Black Snapper and Grouper on the bottom and thick bait fish in the mid water. I just knew something was going to happen here.

I was hoping for a good size Bohar Snapper, but these fish are tricky to hunt and present a good challenge to shoot and land. I dived down trying to make as little disturbance as possible. As I got onto the bottom the Bohar had moved off down the reef or into caves. I stayed around as long as I could and then had to leave, spiraling slowly on my way up to check around for any gamefish on my way to the surface. 5 metres from the top, smack bang in front of me was one of the many fish of my dreams: a Dogtooth Tuna! I had read about these fish for years, and now had my first chance at shooting this amazing species in Mozambique. I took my time to line up the shot just right and pressed the trigger. The spear flew fast and true. It connected the fish just where I wanted it to, on the back centre half of the fish. One kick and it was off, I could not believe it… I had lost the fish! The water was so clean, that what I thought was a 10kg fish was actually much bigger and much further away than what my eyes were telling me. Although I was disappointed, the experience gave me great confidence in my new gear. I shot the fish right at the end of my RA 1.3’s double wrap and had still hit dead centre.

I reloaded and before I was done the magic continued. Two massive Manta Rays pulled in right under us. I didn’t hesitate to dive down and swim with one of them. As I got down onto the back of the Manta I could see a couple of others in the distance. What an awesome experience just watching these slow moving giants seemingly glide through the water.

As I surfaced I just heard screaming, “Cobia Cobia!” A really nice fish swam under Gumby, our camera man, and he was shouting to get my attention. I looked to my left and saw an awesome sized fish tucking under the wing of one of the Mantas at the back of the group.

Although the Cobia seemed to be moving slowly with the Manta, when compared to human speed it was  going at full tilt. I put my head down and started kicking as hard as I could to get close. There was no way I was going to catch up, and almost gave up. In a split second I saw the front Manta banking right and I just knew the fish I was chasing would follow. I broke off at a sharp right angle to cut them off and the Cobia did something I really didn’t expect. As it saw me bank off to the right, it launched off the back of the Manta and swam straight towards me.

I could not have planned things better. I just waited where I was and the fish came closer and closer. At one point I remember being completely mesmerized by the majesty of the scene, but I still had to pull off the shot. I waited for what seemed like an eternity for the fish to turn and give me a broad side shot. Finally it turned, I pressed the trigger and wham! I nailed the shot. The Cobia put up a powerful fight and in about 10 min I landed my first fish of the trip: an 18kg Cobia. What an amazing experience that was to set the trend for the rest of the trip. We were experiencing  neap tides, which meant that the tides were really slack and there was little current. So Day 2 ended with a couple of reefies, with Chris landing a very nice Malabar. He said 15kg was small for this species, but a Grouper of this size shot at 30m was no average achievement in my books.

Day 3 will be marked as one of the most intense and crazy spearfishing experiences of my life thus far. We decided to go North (not saying where) and dive some secret spots that were given to us by a really good friend who lives in Mozam. The first couple of reefs were dead, but then we hit a spot that just lit up the fish finder. On our first drift, as I jumped in I saw a beautiful Sailfish. I was not loaded up yet (bummer!) but Chris was ready. He immediately dived, the fish came in on him perfectly and he made no mistakes. Not only was it a perfect shot, but his camera work was fantastic too. The clip of attention of the surrounding fish we started seeing those little white spots disappear below us. The Couta came in and we landed a couple. Our cameraman landed a bus of a Jobfish of 11.4kg on the bottom.

Then, just when I thought the day was done, I was back in dreamland. I dived down deep under the chum trail and saw it again: the fish I had been hoping to land for so long… a Dogtooth Tuna. It started to swim off away from me so I turned slightly away from the fish and swam with it. It did exactly what I hoped. It turned to check me out and as it turned I swam towards it. Things nearly went south when the Doggie realised I wasn’t so friendly and started swimming away again… but unfortunately for him, it was too late. I stretched out, aimed and nailed the shot.

The fish went crazy and by the time I got to the surface my gun reel was almost out of line. I just had enough time to clip my belt reel onto my gun and then the fish started off loading my belt reel. I know there are different opinions about the belt reel, but for me in this instance it was quite simple: no belt reel meant that I would lose my gun. Again I shouted to Rob for a buoy and within seconds I was clipping one onto my belt reel. At this point I knew it was almost over, and everything would now all depend on how good my shot was. I fought the Doggie for about 5 minutes and as I got it close I checked the shot, which was centred but not through. Chris did a back up shot for me just to be sure…

had landed another fish of a lifetime. The sun was on its way down at this point, so the Doggie was the last fish of the trip for me. What a grand ending to a phenomenal trip. As a whole, the experience will go down as the most exciting hunting adventure of my life, far exceeding my dreams of the perfect spearing trip.

A huge thanks to Rob Allen for all he did to make this trip possible and and so very memorable, our crew that worked so hard to capture all the action on camera, and last but not least to Chris Coates for always being there and backing me up every step of the way.