The trip that took first place 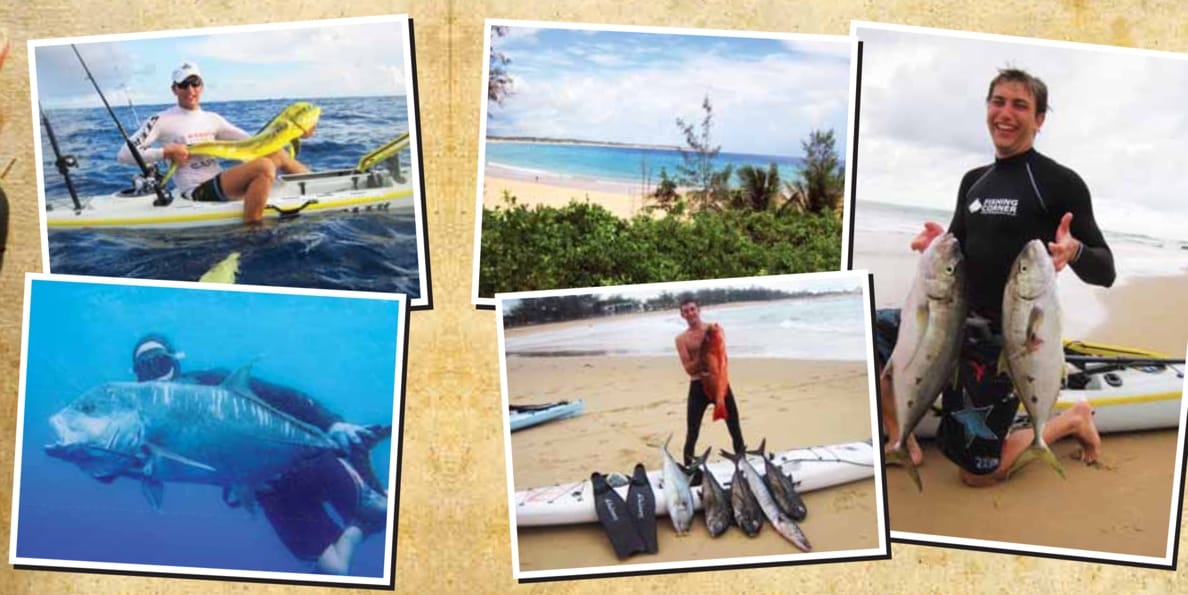 The whole thing started with the Winkle Kayak Fishing Club. At their annual Inter Club fishing comp last year, the Umgeni Fishing Kayak Fishing Club took first place, and I was fortunate to be part of the team. The prize was a trip to Tofo in Mozambique to stay at the amazing Cassa Barry Lodge. We decided as soon as we’d won that we were just going to set the dates and book the trip for early January 2011.

The build up of excitement for the trip was awesome, as we had about 9 months to prepare. I was just super excited to go away and take it easy. Generally every time I have been to Mozambique it has been for work or for some or other competition (not that I am complaining, I love it up there!). I work for Stealth Performance Products and had a few new Kayaks to try out on the trip: the new Double Evolution and the 550 Splash, both of which were of great interest to me as spearing craft.

On the way up to Moz, I received a call from Warren Bennet who was at Tofo. He told us that the roadworks were finished and that the road between Mashish and Inhambane had been resurfaced, resulting in two hours being knocked off the trip on his way up! He also told stories of Couta and Sailies being caught each day, which only served to add to our excitement and anticipation of the trip.

The drive up turned out to be a breeze and by two o’clock that afternoon, we were sitting in the beach bar at Cassa Barry eating perri perri chicken. We then settled comfortably into our chalet; and made our dive gear and fishing equipment ready for an early start the next day!

We woke up to a massive electrical storm inland of us, but the sky out to sea was clear. There was a light breeze blowing on shore and the water was like crystal. We launched the kayaks out of the bay and headed to the deeper marks. Scott (being new to spearfishing) was on the double kayak with me while Jarred Martin and Luke Dalton were both on Evolution Stealth kayaks. The idea was for me to dive with Scott and show him the ropes, using my new Free Divers carbon reel gun.

When we kitted up and jumped in, the water was so clean it felt like we were floating in the air. I could see fish on the bottom at 30m! There was a massive shoal of Big Eye Kingfish and Yellow Spot Kingfish spiraling below us at around 10 metres. I loaded Scott’s gun, he dived down, lined up and fired… but missed. Shooting too far is a common mistake in such clean water.

When it was my turn, I breathed up and glided down into the mass of fish, and leveled out still holding my gun under me. I looked around and found that I was literally engulfed by fish. I was about to line up on a Kingfish, when I spotted a shoal of Rock Salmon below. They were massive. I carried on gliding down to them, and they snuck over a ledge. Great, I thought, now they can see me! I came to rest on top of the ledge and slowly moved to where I knew they would be with my gun extended. I picked out the biggest fish and fired, hitting him at the top of the gill plate. I returned to the surface with my prize fish in hand. While loading the Rock Salmon into the kayak I heard Scott shoot, and turned around too see a Dorado going mad and Scott holding onto his gun for dear life. I shouted to let the gun go… but too late, the fish tore off the spear. We both spent the next few minutes laughing at what had just happened.

A few hours later with a few Yellow Spots in the hatch, I heard a shot come from Jarred. I might sound crazy, but you really can hear that solid thump when a large bodied sh gets shot. In the distance, I saw Jarred returning to the surface from a deep dive. He shouted GT and the fight was on! He was holding the fish off the reef, and I swam over to check out the action. It was such a great sight, looking down into the crystal water and seeing the sliver shape of a GT fighting at that depth. He landed the fish, and we decided to call it a morning.

The weather remained perfect, which meant that the afternoon dive was on. Scott was now super keen to get his first fish with a gun. We headed out again while the others decided to chill on the beach. We arrived at the spot we’d dived that morning and jumped off to find the conditions just the same as before. The Kingies were still there. Scott loaded up and dived down, this time getting closer and fi red, butting his spear through two Yellow Spots. All of this action brought in a nice sized Zambi, but thankfully the fish were landed and loaded into the kayak in no time.

Then, I grabbed the fl asher and set it at around 10 metres. Soon things started getting interesting. First, a lone Couta swam in for a look. I pointed it out to Scott who dived down and chased it like crazy, shooting out of excitement and missing the fish. The highlight of the afternoon was a Sailfish swimming right up to us on the surface, all lit up and flaring its sail. It was so close that I could have touched it with my hand. I managed to put a shot into its shoulder, and it raced off at a pace along the stretching my 3 metre bungee to the max. There was just too much pressure on the fish and it tore off, resulting in me losing the second sailfish that I have shot. Maybe I’m going to be third time lucky!

My spear was bent, so I took my Free Divers reel gun out, which was when I realised that my belt reel was back on the beach. As luck would have it, five minutes later a Wahoo swam onto my fl asher. I took a deep breath and dived down towards my fl asher, leveled out and looked towards the Wahoo. He had turned perfectly broad side to me. I extended my gun, aimed and shot the fish mid body. The Wahoo raced off with the reel spinning on my gun. I turned and swam toward Scott wanting to clip my gun onto his fl oat line, but before I reached him I was out of line. Once again there was too much pressure and the fish was off the spear. Scott turned to me and said, Oh well… (his favorite saying when he loses a fish) and I just had to laugh.

As a first time spearo, Scott was hooked. On his first day of diving he saw Coutas, Wahoo, Dorado, Yellow Spot, Big Eye, GT, and got buzzed by a Zambezi shark! During the remainder of the trip, we had near perfect weather: no wind, no current and almost no overcast days. It was an awesome experience to share with such a great bunch of guys, plus I’ve gained a new diving buddy.

The accommodation at Cassa Barry was excellent. It was very comfortable and relaxed, and our hosts were fantastic. Many thanks to Cassa Barry for sponsoring such a super prize at the Winkle Inter Club last year. Everyone enjoyed themselves, and we’d recommend the lodge to anyone heading off to Mozambique in the future.