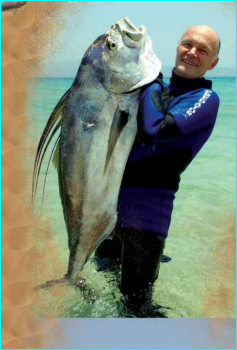 It was early in 2010 when my good friend Johan Coetzee and I discussed possibilities of a proper spearfishing holiday in the Sea of Cortez, Mexico. My words to him were: “You tell me where we’re going, and I’m in!”.

We’d stumbled upon Jonathan Roldan’s Tailhunter International website, and some interesting communication took place between Johan and Jonathan regarding weather conditions, boat rentals, accommodation etc. Jonathan’s detailed weekly newsletters and the information on his website made the decision of where in Mexico to go quite easy: We were going to La Paz!

Arranging boats for nine consecutive days turned out to be quite hilarious. Tailhunter International is normally frequented by fishermen who fish one or two days followed by some days’ sightseeing before going back on the water. After confirming that we really wanted to go to sea for nine consecutive days, all that Jonathan could say was: “You South Africans are animals!”

After much head scratching with regard to what equipment NOT to take, Johan and I boarded the plane to Cabo San Lucas, via New York, on 18 June 2011. The six hour flight from Newark to Cabo San Lucas proved to be mightily jovial thanks to a merry bunch of female New Yorkers heading for the Baja, putting us into a holiday mood.

On arrival in Cabo San Lucas, we were met by Georg, one of Jonathan’s many friendly employees, who made the 200km road journey North to La Paz even more enjoyable by introducing us to our first excellent Mexican beers. Having come from the stormy, wintery Cape and Zululand we relished the hot dry desert air of early summer in the Baja California and the sight of the flat, blue sea was a delight for sore spearo eyes After an early supper at the Tailhunter restaurant, we were champing at the bit to get in the water early the next day.

Tailhunter International has two fishing fleets that use different size pangas. One fishes straight North out of La Paz and hits the areas and banks around Espirito Santo Island and Northern Cerralvo Island. The other fleet is at Las Arenas, fishing around the rest of Cerralvo Island, the southern banks, Ventana Bay, Punta Perrico, the outer buoys and Muertos Bay. These are two fairly distinct areas, sometimes offering completely different species of fish… making La Paz almost like 2 destinations rolled into one.

We were met at 5am the next morning and shuttled to Bahia de los Muertos/ Punta Arena and were on the waters off Isla Cerralvo by 6:30am with Armando, our trusty boat captain. Johan, who is almost 70, opened the account with a magnificent Roosterfish, estimated at 60 pounds while I landed a Yellow Pargo (type of Snapper) for supper. In La Paz you can take your fish to the Tailhunter restaurant and they will be more than willing to prepare it for a nominal fee. Water temperature was 28oC on day 1 with a proper thermocline at about 60 feet, and about 10m visibility deteriorating markedly the deeper we went.

We dived Las Arenas again on day 2, and Johan followed the beaut of a Roosterfish with a nice 20 pound Amberjack, while I played hide and seek with several fair sized Cubera Snapper without much success.

Day 3 started an hour later than usual, with a short walk from our condo to the dock before heading to Espirito Santo Island and beyond with captain Alfredo. Looking for areas with loose rock formations that descend into the sea off fairly steep cliffs, we found suitable structure at the back end of the island. This area held several nice sized Cabrilla, a type of Sea Bass that looks like a Rock Cod, but behaves with a high degree of wariness. In addition, there were several schools of shoal size Cape Yellowtail frequenting the colder water on the bottom. Water temperature on day 3 was several degrees lower than the warm 28oC of the first two days, with an additional thermocline and visibility varying from 2 to 10m. We ended day 3 with 2 Cabrilla and 2 Yellowtail, all in the 15 pound range.

Day 4 saw us back at Espirito Santo Island, and also diving La Partida Island to the North. However, the water was cold, and the viz similar to what we’d experienced on the previous two days. This prompted us to move off to the Marisla Seamount, also known as El Bajo. El Bajo rises from over 500 fathoms to one spot of about 60 feet and a bigger area in about 100 feet of water. Arriving at El Bajo (pronounced “El Baho”) we were met by a fleet of commercial fishing pangas. The atmosphere was similar to that found on the Struisbaai banks and with a fair current running we had to keep our wits about us in order to not tangle with the commercials. Water conditions were a warm 28oC, with about 60 feet visibility from the surface, but deteriorating to 3m once you dived below the pinnacle. Commercial fishermen only fish El Bajo during the week, so if one wants to target this area it is advisable to do so over weekends. It is, however, a fair distance offshore and the day should preferably be windless. We ended the day with another Yellowtail and a 10 pound Yellow Pargo shot at El Bajo.

On day 5, we headed out of La Paz again. After buying some live bait to (hopefully) attract some of the big Dorado we’d heard the fishermen had been catching during the week, we went out towards the Northern part of Cerralvo Island in the hope of finding some patches of seaweed while crossing the channel between the mainland and the island. Our search for Dorado was without success, but we managed to dive an area called La Reinita towards the Northern end of the island where monster Wahoo are regularly encountered. The current was ripping at La Reinita, we’d spent several hours in the water and hadn’t found any gamefish… and our captain realised we were getting despondent.

He recommended we try a different spot, called La Reina, a couple of kilometers North of the island. La Reina is a small area of rock above the water with a lighthouse and some resident sea lions. It drops off into very productive diving areas between 70 and 110 feet before falling away rapidly into undivable depths. With little current, no thermocline, 28oC water and some scattered wreckage to explore, this was heaven sent. Five days of consecutive diving had made a positive impact on our fitness levels and I managed beautiful specimens of each of the three prime targeted species, i.e. Cubera Snapper (Dogtooth Pargo), Barred Pargo and Cabrilla (Sea Bass).

On day 6, we went back to Las Arenas, where Johan landed a beautiful Yellow Sea Bass, a fish rarely seen in this area. Other than that we only saw some rats and mice, but dived several new areas.

Johan finally took a day off on day 7, and I returned to Las Arenas to hunt more Pargos. I take my hat off to anyone in their 70th year who dives six full days in a row, shooting some prize fish, all the while having to contend with my single minded fixation for shooting Pargo and Cabrilla at 30m depths!

I managed four nice sized Cubera Snappers and one Sea bass on day 7, the biggest Cubera being a magnificent 28 pounder.

By the end of our trip, we were the talk of the Tailhunter International crowd, providing quality fish for our host, our boat captains, their friends and family on a daily basis. So, on day 8, Jonathan Roldan decided to accompany us and take some underwater footage of our endeavours. The only setback of our entire trip was the fact that the housing of my own GoPro began to leak, having fitted a flat cover just before we left South Africa. Luckily Jonathan, using his GoPro, shot a memorable movie clip of our day off La Paz, again diving La Reina. Water conditions were superb and although both Johan and I lost some prize fish, we at least ended the day with different species of Snapper in the hatch.

We went back to Las Arenas for day 9, our last day at sea, and dived the back end of Cerralvo Island where I managed a nice sized Cubera in very bad visibility and a smaller Amberjack towards the southern end of the island.

That afternoon we headed back to La Paz tired but satisfied. A last supper with our hosts, Jonathan and Jill Roldan, was followed by a good night’s rest and transfer to Cabo San Lucas early the next morning for the long journey home.

Jonathan Roldan’s Tailhunter International comes highly recommended and they provided us with a superb customer experience. Jonathan and Jill are a delightfully friendly couple who go out of their way to meet the needs of every client personally. “When your life finally flashes before your eyes, you will have only moments to regret all the things in life you never had the courage to try” is a philosophy they both hold a spearfishing trip to the Sea of Cortez in Mexico is most surely something that should be on each and every spearfisherman (and woman)’s “bucket list”. The Tailhunter island-style restaurant has great atmosphere where you can enjoy your catch cooked with a delicious Mexican style twist. Our condo was situated right on the beach and was comfortable, clean and came with maid service. Johan was even able to freeze a cooler box full of fish fillets to take to his friends in the USA.

We were there during early summer when the warm Pacific water had started to move into the Sea of Cortez. There were not many gamefish about as the big Yellowtail had moved away from the incoming warm water and the Wahoo, Jacks, Sailfish and Marlin still had to announce their arrival. The fishermen were getting Dorado, but they were not yet plentiful. Some of the fishermen did very well with big Yellowfin tuna in the deeper water, but as a spearo you would probably have better success targeting them off Cape Point. Nevertheless, we had superb diving and targeting the elusive large Pargos and Cabrillas was a thrilling challenge. Sea conditions in the Sea of Cortez are generally flat and calm, with very light winds. However, as the summer progresses, the tropical storm systems move Northwards from the equator, so that La Paz can sometimes experience a few days of strong wind, especially in the late summer. Once every few years a hurricane hits the Baja with the greatest danger being during September to October. The time for the big pelagics is from July to October. The Tailhunter skippers are experienced fishermen who find the spots using landmarks. The pangas are powered by single 90 HP Hondas and travelling long distances to get to the dive spots is no trouble to them. They have a good radio network going between them as a safety measure. We took along a portable echo sounder, which we put to good use for finding the pinnacles and a handheld GPS is also recommended.

For more information on fishing in the Sea of Cortez at La Paz, visit www.tailhunter-international.com