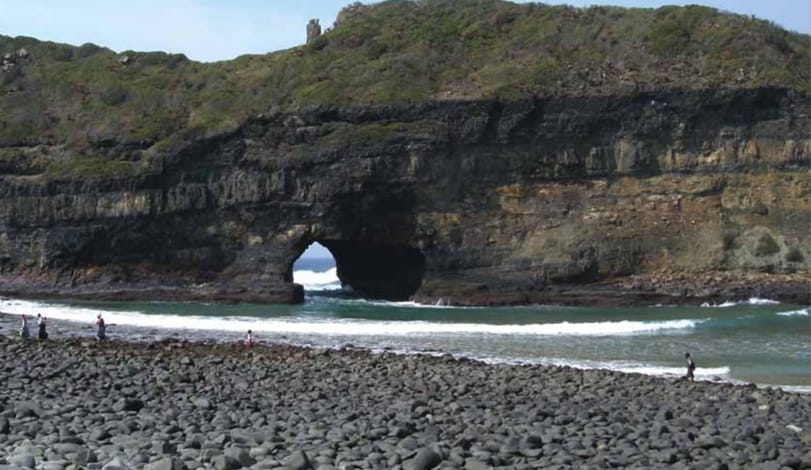 It’s no wonder our forefathers named it the ‘Transkei’… loosely translated as ‘that place over that river’. It was a place so formidable and difficult to transverse yet alluring beautiful. Not much has changed since those days. Sure, now there’s a spiderweb of mud roads criss-crossing the landscape, which makes getting from A to B at least possible. The mystery of the Transkei still grips you. It’s almost surreal.

Deep green valleys carve their way through to cliffs that plummet into the sea, as if the hand of God came and tore away the shoreline. The Transkei is like something out of a Tolkien novel, a ‘Middle Earth’ of sorts complete with rolling mists that cloak its secrets. Even the trees grow strangely, twisted and battered by the wild winds and elements.

The Transkei ocean, not unlike the land, also has its own thing going on. It’s not at all like the Cape or Natal. The Transkei cliffs seem to give the sea an odd ‘bump’ even on calm days. The colour of the water is different, a ‘clean green’ gloom with an airy feeling to it that only adds to the adventure and craziness of this phenomenal place.

For many however, it’s not just the magical setting but the abundance of world class spearfishing opportunities that provides good reason to make the great trek to the Transkei from all over South Africa. Often, trips to the Kei are planned with great excitement and expectations, only to be washed out by the area’s notoriously temperamental weather… but even in these cases, one only needs a glimpse to fall in love. For some, the Kei has become so much a part of their lives that they regard it with a sense of fierce ownership. Completely smitten, they guard the treasures they have found there, like Gollum protecting ‘the Ring’.

This said, you can imagine that trying to glean information for a write up on the Kei was like pulling hens’ teeth. Suddenly, guys had no idea what I was talking about. Some were blunt and refused point blank to say anything. But, as always, there were those who still remember what it was like to struggle along without a clue, and I am truly grateful to those who shared their stories and secrets.

The result is our guide to spearfishing the Transkei. There’s enough good info here to ensure that eager spearos avoid being lead completely up the garden path, while (hopefully) not divulging too many ‘secrets’ and upsetting anyone with Gollum- like tendencies. Our area of focus is from Xhora River north past Hole in the Wall towards Presley Bay.

The big question when contemplating the Transkei, is when to go. The Kei is well known for its rivers that make the vis bad, and rough conditions that can last for weeks. The overwhelming consensus from those in the know, is that when in the Transkei you simply have to wait, watch the weather and take your gaps. I know that this is not always easy, especially for the guys booking family holidays months in advance. In that case, the best time for a trip to the Kei is probably early Winter, which offers the driest and most consistent weather.

There are also certain seasons for different species, so the time of year that you plan your trip depends on what fish you’re after. Some of the key target species and their seasons are:

Cape Yellow Tail: Mostly seen during the Summer months on the points, with December being the best time if water conditions allow.

Cracker (White Mussel Cracker or Brusher): Mostly taken in the warmer months between September and January when you can find them in large numbers. However, in Winter you may see a lone ranger or two.

Poensies (Black Mussel Cracker): Best hunted during the Winter months when they tend to be found shallower than in Summer.

White Streenbras (Pig Nose Grunter): Found during the Winter months (June to August) on both sandy points and deeper reefs.

Garrick: Normally taken during the Winter months and are found on most of the point areas and backline.

Kob (Daga): Can be found all year round both in the shallow and deep.

The Kei has a unique mix of Cape and Natal reef species that can be found all year round. Common fish are the Bank Steenbras (Pink Bankie), Cape Knifejaw (Cuckoo Bass), Bronze Bream, Tassel Fish (Baardman), Spotted Grunter and Rock Cod.

THE BEST OF THE BEST KEI FISHING SPOTS

Mtakatye Cliffs The Mtakatye Cliffs just south of the Hluleka MPA is only dived when the sea is very flat. Shore entry access is limited so this spot is best dived from a boat. The area directly in front of the river mouth has a good reef that ranges from 10m to 18m. A decent range of species can be taken in this area.

Presley Bay Here you will find good reef structure. The reef can be found directly in front of the cottages at Presley’s from very shallow up to 25m. This is a very popular spot for ski-boat anglers.

There is also good reef just south of the Lwandile River mouth, in front of the cliffs that is worth looking at.

Whale Rock There are really good spots here with regular catches of Poensies and Cracker being taken at depths ranging from very shallow up to 30m and more. However, this spot is close to the Umthatha River mouth, and is often dirty when the Westerly is blowing. This area is also known for big sharks!

Maphuzi Point This point can produce some good fish from time to time. For a successful and enjoyable dive here, the sea needs to be very flat. One often sees Shad, Grunter, Tassels, Garrick and Cracker. There is also reef structure ranging from 10m to18m parallel to the shoreline.

Coffee Bay The point is worthwhile diving during the Summer months, when Cracker can be found in the white water. In Winter, it’s possible to catch Garrick that come through chasing the Shad. There is also reef structure off the point at a depth of 10m to 15m, where a mixed bag of reef species can be taken. There are loads of accommodation options here, but you will have to go through to Hole in the Wall to launch if you are not shore diving.

Hole In the Wall, and King & Queen This area has mostly shallower diving options with all the blinders and white water areas good for Cracker during the Summer months, and Kob and Pignose in Winter. The ‘King & Queen’ are two well known spots to dive around. These are easily accessible from shore and produce some very good fish. There is also reef structure at a depth of 10m to 30m off Black Rock, which is good for Poensies. Between the launch site and Mbolompo Point, there are a number of shallow blinders. These are good for Cracker in Summer. Most reef species can also be found on these spots.

The Huts The Huts is an area south of the Hole, marked by some rural huts on top of the cliffs. It is a reef structure at 8m to 25m parallel to the shore. A mixed bag of species can be taken in this area, however is either hot or cold. It also is home to a large number of big Raggies, which are always trying to sneak up on you.

TIPS•TIPS•TIPS James Lawson-Smith: Your basic dive strategy in the Kei is to be as quiet as possible. A reel gun will help. Make as little disturbance as possible. Your whole crew needs to do the same or you will not get the results you are after.

Ryan Burmister: I have found that the isolated sand stone reef and thinner ledges are best. There is lots and lots of reef in the Kei so you end up shooting very good fish straight away, but you may lose out on prize fish by not looking around a bit more first.

Guyla Plaganyi: A good time to go to the Kei is during a period with light south westerly winds and a low swell. The trick is to have a week of light westerlies before the big buster comes through. Just make sure you are diving south of the launch, in the event that the westerly hits. Most good fish are about 100m off the main reefs on scattered boulders and reef edges. Always start your drift 100m upcurrent of where you think you should start. When traveling, check the water temperature on the fish finder. Fish are always found in the patches where the surface is warmer, and the surface temperature can change every few kilometeres. The edge of the thermocline (often yellow) is also a great zone, this depth is often between 12m to 20m and is good for Poensies.

Ed’s note: work out the depth of the thermocline and find a reef where a shallow point is just above this depth.