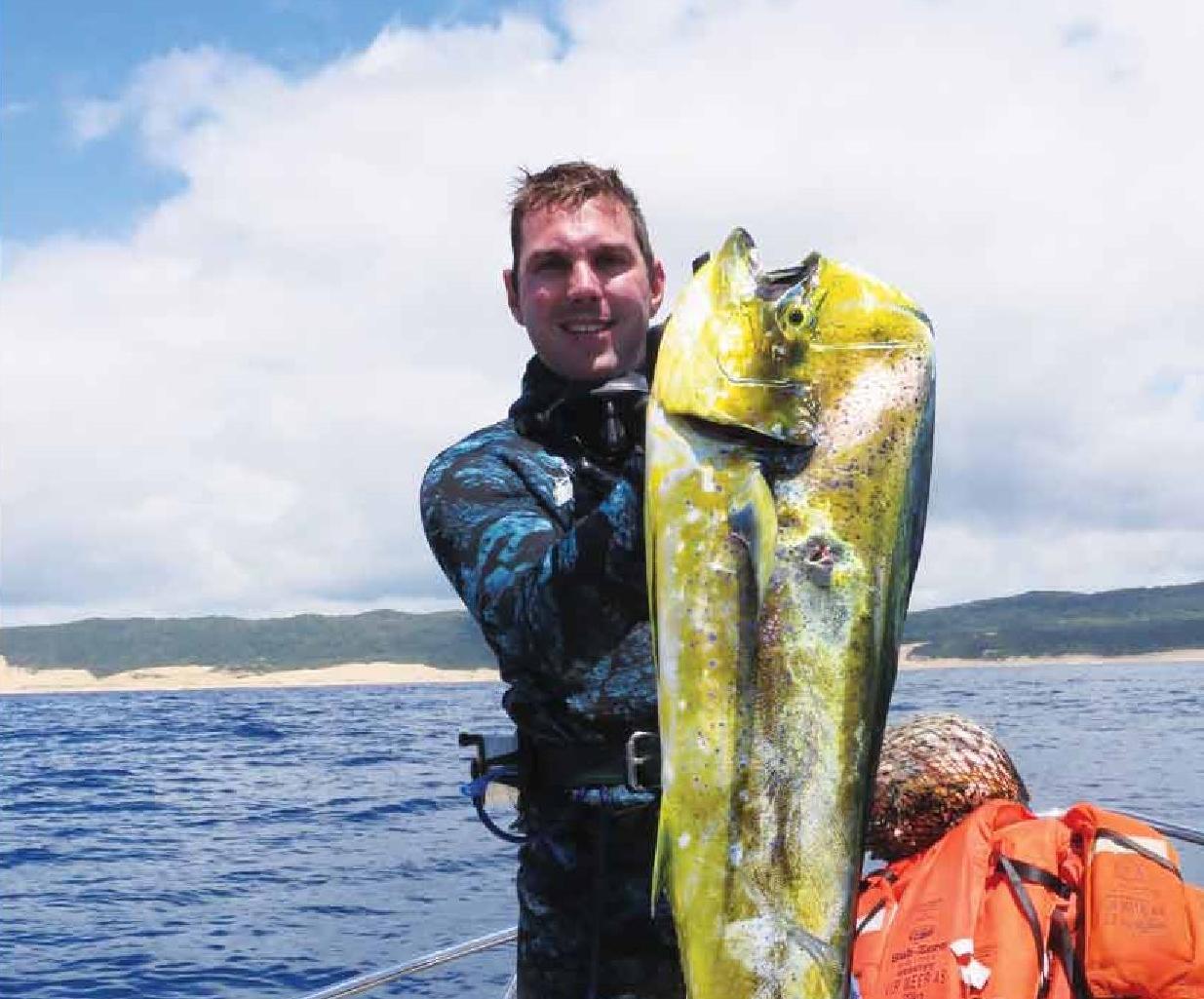 In 2014 I was invited by Nico Johnsen to go spearing down the coast with him for a week during the December holidays. Nico is a good friend and he resides in Sodwana Bay, so I immediately took him up on the offer. It turned out to be one of those experiences which will stay with me forever.

We arrived at Sodwana and due to some strong NE winds pushing through, the conditions were not ideal. The first day dawned and we headed north, but unfortunately there was a thermocline with poor visibility and the fish were scarce. We were out for most of the morning and on my last dive I noticed a fish in the haze slowly swimming away from me. I chased after it and placed a good shot. I had my first fish of the trip safely in the hatch, a 20kg Couta.

On the second day we headed up north once again and decided to dive the deeper waters. On our first drift a school of 4 Dorado came in and circled myself and my dive buddy, Willem. He got a shot in one fish and while busy fighting it, I took a shot at another Dorado which broadsided right in front of me. My spear hit the fish in the spine and the fight was short. A stroke of luck as a few silvertip sharks made an appearance and added some excitement to the mix!

The rest of the day was slow and on our way home we stopped off at Gotham. On my second dive I saw a Couta deeper down. I managed to catch up, put in a decent shot and loaded it onto the boat. We made it back to the beach and I was stoked with my 2 fish for the day, a 19kg Couta and a 12kg Dorado.

While relaxing on the bed that evening, I spoke with Manie from Maginty Lodge; a fully equipped spearfishing lodge which caters for both novice and experienced spearfishermen. Some of my friends were diving off his boat the following day and with the weather conditions being unsuitable for Nico’s boat, I decided to join them. We headed to Gotham, because we were uncertain if the winds would pick up again. This proved to be a great decision. We jumped into the water and spotted Tuna, Dorado and Couta swimming around! Rickus landed 2 Dorado and 2 nice Couta, and I managed 2 Couta for the day.

On pretty much our last drift of the day I dived down, looked left and noticed a small white dot moving around along the bottom. I had seen Dogtooth Tuna before in Madagascar, but never imagined seeing them in Sodwana Bay. I faked any interest in the Dogtooth by aiming my gun at a random fish in the opposite direction, avoiding eye contact. I peered over my shoulder at the last second and saw that the fish had swum closer to me and broadsided. I whipped around and pulled the trigger… The spear thudded mid body, just above its spine and the fish took off. My reel screamed through its line and before I reached the surface I dropped the gun and was on my belt reel while the fish pulled me in a wake for about 15 minutes, towing me out to sea. I had no intention of letting this fish go! Eventually the fish tired and I was able to work my way further up my reel line until I was above my fish. I suddenly spotted a Zambezi coming up from below with its mouth wide open, obviously after an easy meal. Knowing that I would probably never see the fish I had shot again, I dived down and swam screaming head-on towards the shark. The shark turned away a metre short from his meal and descended to the bottom. I grabbed my prize, swam it to the boat and loaded it over the side… The run back to shore was incredible; the adrenaline was pumping all the way back!

After we had beached and loaded the boat, we set about finding a certified scale while taking all the necessary pictures and measurements to enter the fish as a South African record. We were assisted by Tokkie, the owner of Certainty Lodge, who ensured that the witness statements were taken and a properly calibrated scale was used. With Tokkie being one of the top Marlin fishermen in South Africa, he knew exactly which requirements needed to be met.

The Dogtooth weighed in at a new SA record of 31.2kg’s! What an unforgettable experience!

The following day was my final day in Sodwana and the weather had taken a turn for the worse.

We did a short ride out to Gotham and after one drift we decided to dive the point in search of some Kingfish. I managed to spear a Coastal Kingfish for the braai which, to my surprise, also turned out to be a SA record!

My trip to Sodwana came to an end and I was sure that no other spearfishing trip would ever match up. For the next leg of the holidays I was off to Cape Town to meet up with my family! I drove up to Pretoria, spent the night at home and started the long journey down to Cape Town the next day.

The sea conditions in the Cape were not ideal, with only the bigger boats being able to do the 30 mile run offshore. Many of them, however, were making good catches of Yellowfin Tuna. I kept a close eye on the weather reports and constantly toyed with the idea of chartering a large boat to take myself and a friend offshore. For most of my stay the weather looked grim. Then one morning while monitoring the weather, I noticed a gap the very next day. It would be a risk to say the least as the report could easily move a day forward or a day back. Regardless of the variables involved I called up my mate Jean and asked if he was interested. He had not speared Yellowfin Tuna before and immediately said that if the fish were around and conditions were fair, we should go.

I had used Smart Fishing Charters on a previous occasion and had an exceptional experience with them. We met up at 6am and launched. When we were about 10 miles off Cape Point, one of the local fishermen radioed us and said that he had found a crate floating in the middle of the ocean. There was a school of Dorado circling it and they would not take any lures. The arrangement was that he would wait for us to meet him at the location on condition that the first speared Dorado was to be given to him. We chased to his location and on arrival we were literally falling over the deck while rushing to put on our diving gear. We slipped into the water and landed right in the middle of a school of roughly 40 Dorado. We both put spears into fish but they kept on pulling out as the gear we were using was designed for big Tuna and not the thin soft meat of the Dorado. I eventually managed to stone a fish and loaded it onto the boat. Jean landed a Tropical Yellowtail which had been attracted by the floating crate. Within half an hour everything was quiet, so we climbed onto the boat and started looking for trawlers holding Tuna.

We searched for hours… At one stage we noticed a fishing boat standing still in the distance and one of the crew was fighting a fish. We wasted no time and headed in the boat’s direction. When we were roughly 500m away, we began dropping chum into the water. Less than 10 minutes later we started seeing Tuna on the echo at 15m below the boat. Already kitted up we both jumped into the water and Tuna were everywhere, some of them brushing right up to me as they were taking the chum. I lined up on a good fish and hit it just behind the gill plate. The fish glided forward and the eyes rolled back. I dived down and swam the fish to the surface and then to the boat. I managed to land 3 Tuna, each between 50 and 60kg. At one point during the session I was looking down at a school of Longfin Tuna taking the chum below me when I got the feeling that something was watching me. I looked ahead and to my amazement 1m below the surface was a pitch black Marlin, around 80kg’s, staring back at me! The second Marlin I had seen within 2 weeks! I gave a short chase but the fish disappeared into the vast blue in a flash. Once again, I only had the image imprinted into my memory.

Jean landed his first Longfin Tuna out of a school that was travelling at top speed! He also put a spear into a Cape Yellowtail which he managed to pry out of the hungry jaws of a couple of Blue Sharks.

With a long adrenaline filled day behind us, we were ready to climb on the boat and make our way back to False Bay. The drive back was filled with stories of all the fish we all had seen and the ones that got away. The entire experience out in the deep blue is always action packed and leaves me yearning for the next time.