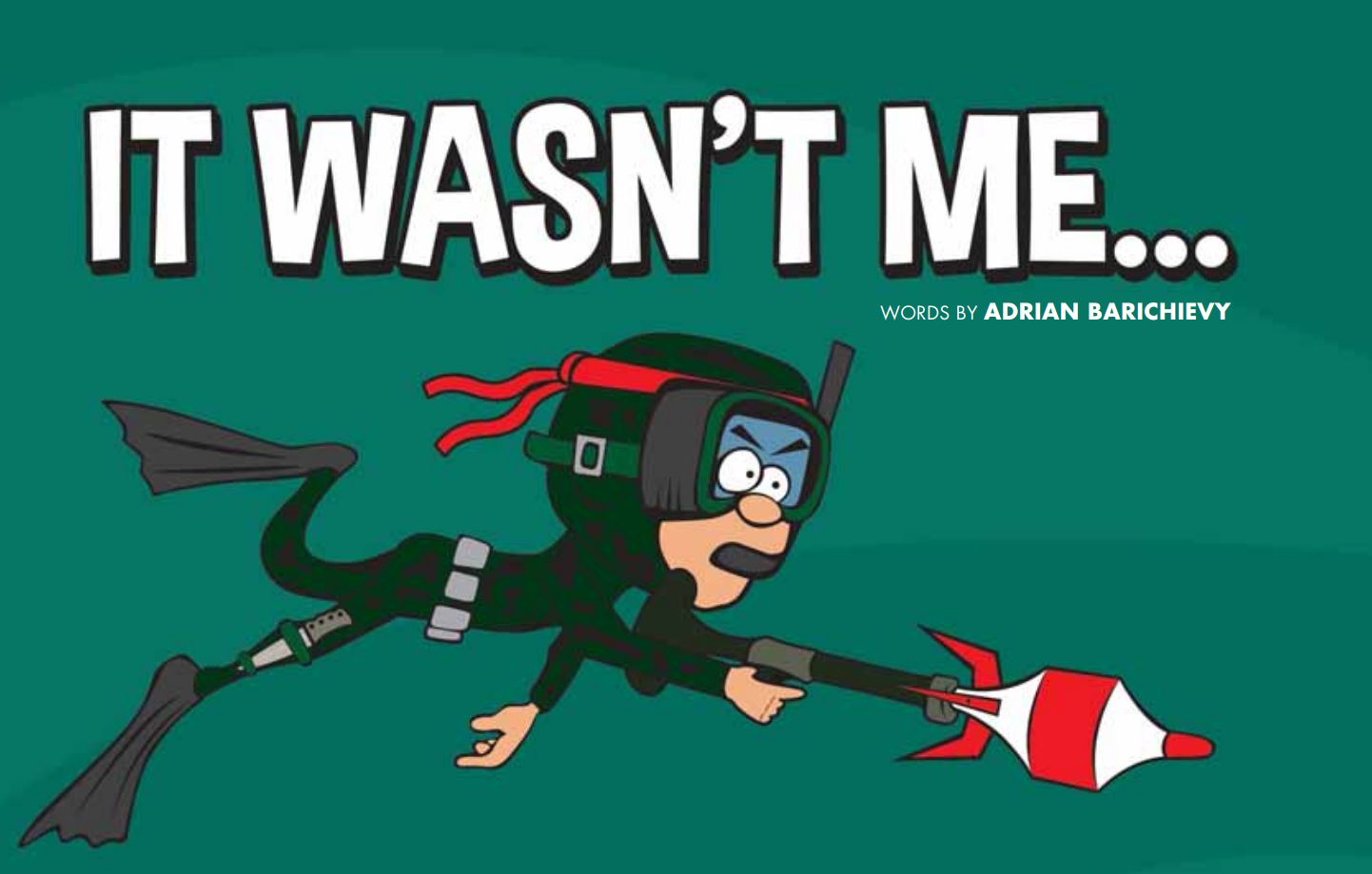 As spearfishermen, we all dream about spearfishing the “holy land”, untouched waters with Jurassic Park sized fish. The unfortunate reality is that these waters are getting harder to find. As the human population grows, fish stocks are increasingly overexploited.

Stand around a braai and mention the word conservation and you will probably be drawn into a heated debate. One thing nobody can argue – we all want more and bigger fish to spear and without
conservation efforts, our seas will ultimately end up like the Med.

For a number of reasons, some valid – others complete Bull, spearfishing over the years has gotten a bad rap. Whilst things have gotten a lot better in the last few years, everybody who gets in
the water with a speargun in hand has a role to play. For starters let’s separate the Bull from the cold fact. Every study you read on spearfishing points to the same thing – spearfishing accounts for less than 1% of the landed catch (studies in KZN, Australia, and USA demonstrate this).

Successful spearfishing is also highly dependent on the weather, water conditions and the diver’s ability. Spearfishing can be highly selective, however, that is largely dependent on who is
squeezing the trigger.

Great, sounds like we’re all innocent… Well not entirely.

In localised areas with heavy line fishing pressure, experienced spearfishermen can locate the last remaining concentrations of reef species and shoot the snot out of them. In the end you are
left with barren reefs. One only has to look at the Bluff near Durban to see an example of this. Sure, past 25m you can still find some good fish, but 25m and less: that’s the situation largely thanks
to spearfishing putting the last nails in the coffin. Sure some recolonisation occurs from the deeper reefs, but you don’t need to be Jacque Cousteau to see that in many instances, in the intensively dived areas, the exploitation exceeds the recolonisation. There are also those at many locations who consider 200kg of pelagic species on a boat with 4 divers is a “commercial endeavour”. Do it once and you will get away with “it was a great day.” Do it two days in a row and people think you’re a twot.

In the 90’s, many of the top divers made an unofficial living off spearfishing, divers powerheaded sharks etc. Make no mistake, the legacy of this still lingers in the public eye today.
So, how do we get a better handle on our Rambo instincts and how do we improve the situation? For starters, over the last few years, recreational angling media has demonstrated a huge shift
of mind set – today every angling show has a happy ending with the fish being released and swimming into the blue yonder, often eaten by the shark under the boat, but I’m sure you get
the picture.

In addition, even the non fishing public has become increasingly aware of how depleted some of our fish stocks are. Many species are now “red-listed” by SASSI (www.wwfsassi.co.za).
Even the organic veggie-buying mom in Sandton can tell you that the Poensie stock is in dire straits.

Then along comes my personal favourite, those who have an issue with dead fish, who assume spearfishing is easy and the fish just impale themselves. They usually go home and eat prawns
farmed in India or buy their red-listed vacuum packed fish fillets from the nearest deli. Not a whole lot you can do about this bunch, please refrain from throwing a handful of fish guts at them, it doesn’t actually help them change their minds…

Picture this scenario: four divers on the boat with a full limit each hit the beach at the Hole and gut their fish on the rocks below the cottages. For the fisherman who has spent the day trying the catch one Bronze Bream, the sight of 100kg of fish all over the rocks looks like total carnage.

The standard spearo response is “screw him it’s my legal limit.” Reality is we need to look a little deeper than that if we are going to create a more positive image for our sport.
Look at your catch composition – how many fish in that pile are slow growing, overfished or highly resident species and how many do you really need to eat?

That 53cm Poensie that gets caught is 10 years old and the reason so few divers will ever get one over 10kg is that it takes 18 years for that Poensie to reach 11.9kg. During the 8 years that
it takes getting from legal to +10kg, most are caught. So if you want to see more big Poensies, stop spearing the 5kg ones and moaning that you have never shot one over 10kg’s.

The humble Bronze Bream lives to 40 years old and is highly resident. That Daga, its stocks are estimated to be between 3 or 5% of its unfished biomass.

A misconception is that all gamefish are a good option to shoot. Many are, but recent estimates on the Garrick stock are talking stock levels of 14% – 15% of the unfished biomass.
It’s a bit like a land hunter claiming that he’s shooting for the pot and shooting a buffalo calf and 9 Guinee Fowl – more than he needs. In most cases, that 100kg pile of fish doesn’t exactly
demonstrate trophy hunting ether. Some things you can do that will make you a better diver, reduce the pile of fish and help towards conserving the species we hunt:

1. A good policy, in terms of sensitive species, is not to take one unless it’s bigger than your previous personal best. You will quickly eliminate the 15kg Iggy’s from your bag in Moz or the 5kg
Poensies in the Transkei – the kind of fish that get people grumpy.

2. Limiting yourself to 1 fish per species is good practice, any puddle jumper can shoot 5 Knife Jaws, and it’s a lot harder to find 10 different species of decent size. Most competitions work
on this format.

3. Don’t shoot borderline fish i.e. leave the 36cm Galjoen and the 62cm Brushers alone. The bigger ones are harder to shoot and the practice will make you a better diver.

4. If you do need a few extra kgs of fish to eat, shoot species that can handle a klap, Tail, Cuda, etc.
5. Take an active interest in local marine policing, take the time to get to know your local Parkie – contrary to popular belief, they are not the enemy. Save their cell numbers and report illegal behaviour. They depend on public assistance and every little effort makes a big difference.

The other source of much bad PR is you taking your trophy pictures on the main bathing beach with your 20kg Poensie in front of the Sandton organic veggie “I only buy green-listed fish”
mom. You will also hear statements like “That’s the easy way” or “Shame!” etc. Yes “Screw her!” I hear you shout. Do the smart thing – take your trophy pictures on the boat or in the water. It’s
admin you don’t need, stop stoking the fire.

If you’ve got a spare fish, give some to the bystanders. You’ll be amazed at how quickly they go from “They were raping the ocean!” to “Those guys gave us a lovely fish for dinner.”
New guys starting out – look to the experienced guys to learn the ropes. The more experienced you are, the more opportunity you will have to change the way beginners operate. Monkey see
monkey do.

Lastly, for the guys still selling their fish, as long as you see a Knife Jaw as R80 you won’t be able to let one swim past. Sooner or later you will get busted and you will be one of the few that
continue giving spearing a bad name.

Yes I can hear the muttering already, rich coming from Adrian who, in the 90’s, was filling his boat at any given opportunity – yes I did, but times have changed. Besides being illegal (not that it
wasn’t then) it brings our sport into disrepute and the reefs can no longer handle being our personal ATM.

Whilst we should never apologise for wanting to take our supper or trophy with a spear in a sustainable manner, (sure I read somewhere that the word vegetarian is an old Apache word
for a bad hunter?) we should all tow the line in terms of limiting our catch and not catching our limit.

At the end of the day our “screw you” or “if I don’t shoot it somebody else will” attitude will do us no favours, our behaviour and actions will always determine how the public view our sport.