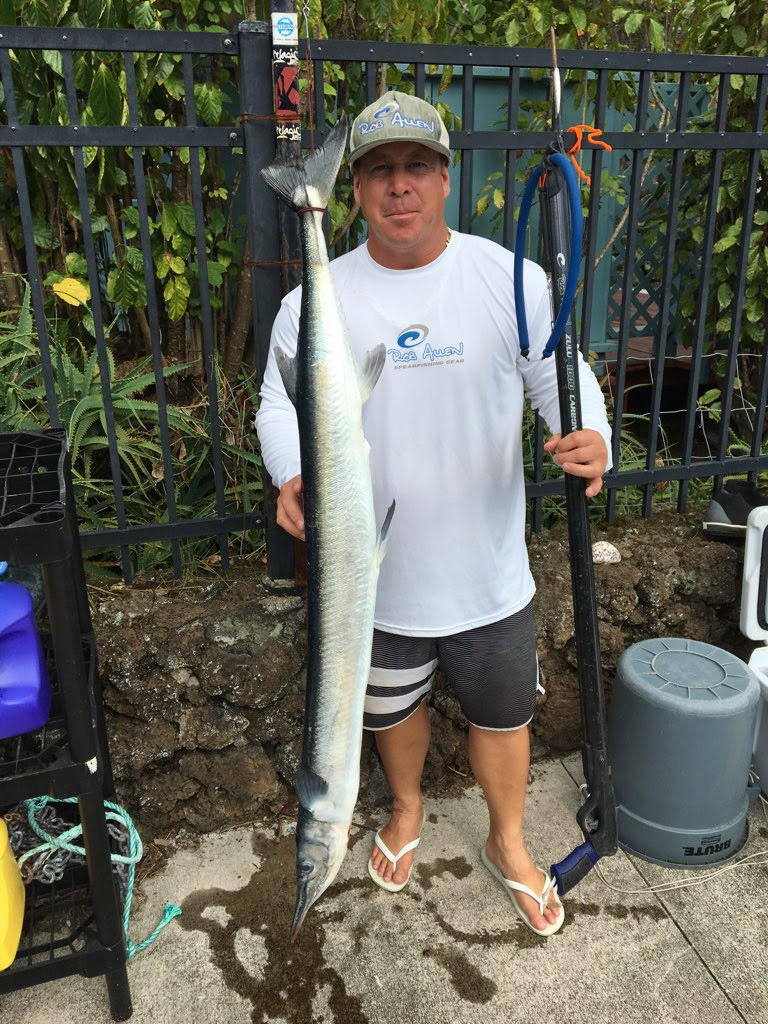 Shot and Contributed by : Calvin Lai

Another adventure spearfishing in Kona waters not expecting to shoot any possible world record fish. So my friend and I were diving very shallow water this day and shooting fish for a bbq. I’m always wit my 110 carbon wahoo as I use that gun for my all around reef gun here in Hawaii. As the day went by we were coming close to the end of our dive and we had enough fish that we needed and then some. Parrot fish, goats, and some really nice fry fish for the bbq.

We decided to jump back in and hunt the ledge in bout 60 feet of water and didn’t really see anything till the end of our dive. I kept chumming a little more of my bait fish and in the distance I see like a long shape on the top of the water and I no it’s no ono”Wahoo”. It’s an “Aha” a really big one the largest I’ve ever seen. I’m like this this looks like a wahoo as far as size. It got closer then ran away and I never saw it for bout 10 minutes. I thought that was my chance and maybe a state record if that. I kept chumming and this fish came back but closer it was really close and if u no this fish it does come after u if u don’t put a good shot in him.

His teeth was visible with large sharp teeth and I said I gotta shoot this guy even if my dive partner will laugh at me bout shooting this fish. As the fish approaches my distance and got real close I pulled the trigger and shot him really well almost a stoned shot but still swimming and I no this guy could turn around and do some damage especially at this size of fish. I pulled him in slowly and finally brained him wit my knife and got him back in the boat. I actually didn’t have a real and thought that after I shot the aha, if it was a bad shot I would have definitely lost my gun. This fish was longer then my 100qrt cooler and was fat as round as a football crazy size for this type of fish.

Well as we headed back home to check the weight I no I needed to get this on a certified scale and weighed properly if it is a record fish. So I went to our local supermarket and I couldn’t believe this fish was over 18 pounds and was over the world record speared at 17 pounds. I held on to the weigh slip and took some photos, now it’s a process and a pending world record. Let’s hope all paper work goes well and I’ll keep everyone posted. Thanx for my sponsors Rob Allen spearfishing, Meister specialized diving, Hawaii Fishing news, Sportube USA.