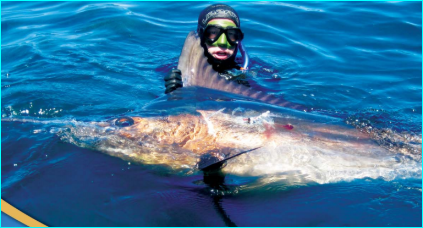 Working for a big corporate means that you don’t have the flexibility to take off at a moment’s notice, head off to an exotic location and do what you love. So, when the gap comes, you grab it. I had such an opportunity this past March to go to Maputo and explore places like Baixe Danae, Jeremias and B24. Having dived great spots like this before, I knew we could expect anything: Marlin, Doggies and big Malabar Rock Cod not to mention the ever present Couta, Kingies and Pike.

As the plane began its descent through the clouds, approaching Maputo, I felt the butterflies stir in my stomach. The bay came into view with Inhaca on the horizon, surrounded by a perfectly still, glassy ocean. My son Allen and I were to meet up with local spearo, Jao, and do some serious spearfishing. We spent the first afternoon relaxing and re-living past experiences.

Next morning we were up at first light and headed out from Club Naval into the sunrise. You can imagine the disappointment when we arrived at Baixe Danae and found that the water was green. No amount of positive thought could change this. We had travelled such a long way, so we had to get in. The only positive factor was that the temperature was 28oC. Surface visibility was 2 to 3m and below that about 5m. The bottom 5m opened up to about 8m. Considering that most of the spots were 23m and deeper, it was not an exciting a prospect swimming through the soup in search of fish.

Our fears were quickly forgotten as Couta, Pike and Kingies began filing through in a continuous stream and soon we started to enjoy ourselves. The catch of the day went to Allen who speared a Malabar Rock Cod of 31kg.

The next day was our last, so we were keen to find something big to spear. Although the visibility was still really poor, we bagged a couple of nice Ignobilis Kingies around the 23kg mark. After a few drifts we decided to try a deeper pinnacle further out to sea. I took a few deep breaths and headed down, through shoals of baitfish. At 24m I levelled out, scanning the bottom. Seeing nothing of worth I looked up. I startled as a Black Marlin appeared right before me!

For a split second I hesitated: I had never speared a Marlin before and I only had a reel gun in my hand. ‘Of course you shoot’, I thought, ‘a Rob Allen 1.3m carbon fibre railgun with 2 rubbers is ample.’ The fish was well in range and I aimed just behind the eye as it began to move off at speed. Bang! The spear penetrated slightly further back than I had planned, but nonetheless I had made a good shot. The Marlin shuddered and then with a sweep of its huge sickle tail, it took off streaming bubbles.

Line stripped off the reel at a speed that made a Wahoo look silly. Quickly, I clipped my belt reel to my gun and immediately felt a little more confident with another 60m of line to play with. By the time I hit the surface, about 20m of line had peeled off my belt reel. I decided to apply a little more pressure as I knew I had hit it well, so I let the fish tow me. ‘This is going to be easy’, I thought, as the fish ran along the surface after having tail walked initially. Gradually, I began to recover my spent line, and after about 15 minutes I felt I had the upper hand. The Marlin then changed its tactic and sounded with a burst of strength and speed. At this stage I decided to fight it from the boat. With the visibility being as poor as it was I could not see the fish, and I had visions of a big shark ripping it off my spear, or the barb snapping or the knot parting or… Rather get the fish in as quickly as possible. On the boat I had more leverage and although it was tiring, I was able to winch it in within 15 minutes.

We took some pictures from the boat and then pulled the fish on board. A spectacular fish, definitely making the trip worthwhile: my first Marlin and it weighed in at 95kg. We added a few more Ignobilis of around 26kg mark to the catch and then headed back to Maputo feeling very pleased with ourselves.

This is the stuff dreams are made of…