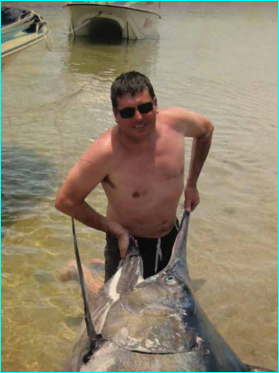 In the first week of December last year, I left Cape Town with my wife Stephanie and friends Brad Torr and Erick Truter, travelling the long haul to Pomene in Mozambique. This was to be my fourteenth or fifteenth fishing trip to Mozam, and although I may be an ‘old hand’ in Mozambiquan waters, I had never shot a Marlin. In Mozambique, we met up with Jean Marais and his son Conrad, who towed their boat up from Durban.

For the first couple of days of the trip, the fish were very scarce, with no current on the deeper spots, and very little visibility on the reefs south of Pomene. Because of the lack of current and viz we decided to concentrate on the shallower reefs. There we could at least expect some shoal Cuta and Kakaap.

On the morning of the 14th we launched at a bright and early 5am and headed to a reef about 5km straight out from the estuary. The conditions were not too bad, with almost no wind or swell; and although there was almost no current, one could just make out the sand patches on the reef in 16 metres.

I was using my 1.4m Rabitech rail gun, powered by 2 x 16mm rubbers, and 25 metres of float line attached to a 11 litre Rob Allen float by 2 metres of bungee cord. Brad, Erick, Jean and I were the first to dive, with Conrad as top man. After diving for half an hour only Jean had a Kakaap of 7 kg, and the rest of us had not seen any fish. We decided to go back up current, for a last drift before heading to another spot.

I was breathing up for my first dive when I saw an enormous fish passing underneath me about 12 metres down. At first I thought it was a shark… until I saw the bill.

When the fish was right underneath me, I dived down directly onto its head, to keep myself in its blind spot. As soon as I thought I was close enough, I kicked 2 metres to the left, to get a better angle, and tried for a stone shot just back from the top of the gill plate. The fish was swimming faster than I realised, and my spear hit him about 40cm back from where I had aimed. At the shot, his head went white, while the rest of the body remained slate grey, and I knew I had a good holding shot.

Apart from the change in colour, the fish gave no indication that it had been hit, instead staying on the same course and speed as before the shot. I let my float line run through my hand as I swam back to the surface, and before I broke the surface, my float pass me by.

I shouted to Conrad on the boat that I had shot a Marlin, and to pick me and the other divers up. This was done very quickly, as we had only just started the drift, and the guys were still quite close together.

Once on the boat questions and advice came thick and fast from everybody. In reply to the question of how big I thought the fish was, I could only reply that everything had happened so fast, and that I had never shot a Marlin before, and really had nothing to compare it to. All I had noticed, was that the bill looked very short and stubby compared to the body, so I thought that it might be a very big fish.

We chased the float with the boat, and Erick and I jumped in the water in front of the Marlin to try and get a second shot in. Even though the water was calm enough to get a perfect line on the fish’s path, it would sense us every time, and just turn to pass us 30 or 40 metres away.

The next step was to get more spears into the fish. The boat would drop me at the second float, about 60 metres away from the fish, and I would pull myself hand over hand towards the fish with a gun in my left hand. The fish was swimming so strongly, that if I lifted my head, my mask was ripped from my face by the force of the water. When this happened the boat had to pick me up, and take me back to the float line.

Eventually I got close enough to the fish to pull myself down on my shooting line to attempt a second shot. The next problem was to turn and aim my gun against the force of the water. More than once I was close enough to shoot, but could just not turn my gun against the water. The fish would then accelerate, and sound, leaving me to get back on the boat to try again.

In the end I managed to get four more spears into the fish, and that combined with the four guns, float lines, and floats trailing behind slowed it down enough for me to get close enough to place a kill shot in the head with a reel gun.

I tied a rope around its tail… and the next battle was how to get a more than four metre long fish onto a 5.5metre boat. Cavo’k is one of the most stable mono hull boats I have ever dived on, and with one guy pushing from the water, and four heaving on the fish, we managed to pull it onto the boat.

The fight lasted more than three and a half hours, and we covered more than 10km from where I first shot the fish. As we only had a 50kg scale available we had to cut the fish up to be weighed. Total weight was 316kg, with a fork length of 3.75m, and total length of almost 4.5m.

We kept about 10kg of the delicious meat, and the rest was given to the local population.