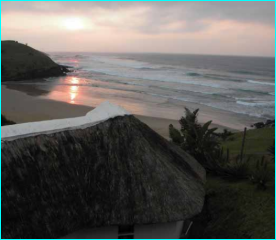 Finally my first dive trip to the Transkei! I have heard so many crazy stories of the incredible amount of fish that lurk below the very so often green haze of this coastline. Nick Horn, my friend and partner in starting the new spearfishing club in PE, Gully Jumpers, has been bending my arm for months trying to get me to do a trip with him to one of his favorite dive spots in the Kei.

Finally, I got a gap to get out there!

Nick and Pete decided to head off early for a bit of family time and promised to do some good scouting before we joined them. They managed to find some promising reef and also landed a couple of very nice fish. Darryl (aka: Mud Prawn) and myself managed to get off work early on Thursday afternoon and headed up the coastline to join Nick and Pete for 2 days of diving.

On arrival the news was not good – the guys had got a couple of fish but had been battling to get more than 4 metres vis the whole week (perfect conditions for the Mud Prawn). It seemed as though we had arrived at just the right time as the weather was moderate and it looked like Friday was going to be the day – what a luck! First things first, I checked my gear and made sure I was well prepared for anything, with priority placed on making sure my spears were super sharp. Most of the fish I would be hunting have armour plated scales and I have heard many stories of spears bouncing off dream catches. I went to sleep that night with visions of huge Poensies and White Steenbras shoaling in front of my ever so accurate 1.3 carbon killing machine.

The launch the following morning went well and we started out on some shallow points to see what was hanging around below the 10 metre depth range before moving into deeper water. I love point diving, especially in untouched areas like this. My first dive left me gobsmacked. I could not believe how perfect the water was. A warm 20 degrees (yes us PE boys find 20 degrees nice and toasty) and the vis was an amazing 5 to 7 meteres. I grew up in KZN and never thought would call 5 to 7 metres vis amazing, but diving here in the Kei or Eastern Cape is a completely different ball game to KZN. The fish are super clever and any vis over 8 meters completely blows your cover.

Although the conditions were ideal, my first 5 minutes in the water left me wondering. I had not seen anything over 500g, let alone the giants I had heard about. It wasn’t even 5 minutes later that I heard the first gun go off. I could not see where it came from, but I immediately dived. I just had my head under the water when I caught my first ever sight of a White Steenbrass. I literally had a second to shoot, so I aimed and nailed the shot. I could not believe it – the fish was on and rushing all over the reef. A couple minutes later and I was holding an 8kg White Steenbras – a good start. I popped my head up to see where the other guys were I saw Darryl swimming towards me with his giant 13kg Steenie that dwarfed mine. These fish really blew me away, the closest thing to them that I have ever seen are spotted Grunter, and you very rarely see those over 5kg. Seeing a similar species over 10kg was such a stoke. We did a couple more shallow drifts and saw some smaller shoals but decided to leave these fish in the hope that bigger ones would come through.

It was finally time to get out into the deep and really put my lungs and fitness to the test. I had not been in the water for a month and a half, so anything over 20 metres was going to be a challenge. Diving 20 metres in 5-7 metres vis and 20 degree water is not what I like to call comfortable.

We stopped on a spot that dropped from 19 to 24 metres and the fish finder just lit up. This sight injected an immediate dose of adrenalin into my bloodstream leaving me with one thing on the brain. Get mask on and dive! We all bailed off the boat and it wasn’t 30 seconds and the Mud Prawn was already subbing – its almost impossible to keep up with this guy. I did my first dive, down, down, down and onto sand. I could not believe it, all this way down and I had missed the spot! We all got back on the boat and drove back up current to try again.

This time I decided to breath up better and dive a bit earlier to hopefully hit the bottom at the right spot. I managed to calm down and started my descent. Halfway down I heard that unmistakable thwak that all spearos know well. I was thinking ‘that damn Mud Prawn – he keeps beating me to the mark every time!’ I kept on descending, trying to remain calm. As I landed on the reef, I knew I had landed perfectly. I just knew that this was the spot we had seen on the sounder – 22 metres deep with Bronze Bream and Cuckoo Bass everywhere. I looked around for some Steenies, but there didn’t seem to be any in the vicinity. It was almost time to surface when I suddenly saw this shape moving towards me. The first thing that went though my mind was HUGE Steenie! I instinctively pointed my gun. It was then that I saw, the distinctive shiny silver dots descending from head to tail that could only mean one thing. I shouted in my mind, that’s no Steenie – it’s a Dagga! It started to move off as quickly as it had come in. I straightened my arm and fire. At this point my lungs were screaming so, I sped to the surface with my reel spinning. I could not believe what had just happened – Dagga were the furthest thing from my mind and I had just shot my first one. I played the fish gently not knowing if the shot had made it through the tough scales and thick body. I hate that feeling, knowing that you have a good fish on, but not knowing if the shot will hold. Everything turned out perfectly – the shot had landed centre body and made for a short and sweet fight. 5 minutes later I was holding one of the best fish I had ever taken. What a rush, I’m still buzzing now!

The next day dawned and I was amped. Luckily, we ended up getting stuck into those beautiful Steenies again. At the end of the day’s diving, Darryl had the most species and I bettered my PB Steenie. What a day and what a trip.  The stories we had heard were true. We had somehow managed to catch a small gap in the weather which meant that we were able to capitilise on an area that is very seldom dived and all landed great fish.

Many thanks to Nick and Danielle Horne for everything. They housed and fed us, Nick did the scouting like a champ and put us right on the spot. What more could you ask for? Legends!